Home » News And Information » What is DACA the deferred action 2018

What is DACA the deferred action 2018

19 News And Information 3:31 AM
U.S. government program DACA (Deferred Action for Childhood Arrivals) is protecting some illegal immigrations who living in the United States Of America without any legal papers as children, they can apply to US government to request a temporarily avoid deportation and remain in the USA.

The DACA program started back in 2012 by Barack Obama. The program allowed some people to stay in the country. Illegally as minors to be protected from sudden deportation. Recipients, called dreamers, were able to request consideration of deferred action for a period of two years and so, which was then subject to renewal at a later time.

Later in November 2014 ex-President, Barack Obama has announced to extend the policy of DACA and add additional permission for it. It was basically designed to cover additional illegal immigration. Around 800000 young people are inside the program. Thousands of people will be jobless incase DACA program rescinded permanently. 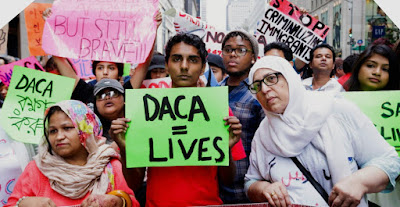 The new Trump administration has taken a massive step towards DACA policy change in September 2017 and now planned to kick out DACA for current recipients, and no new requests from individual will be granted. The lower court of America has order Trump Administration to keep accepting the renewal applications for the next order. Supreme court of America has taken another step and rejected Trump's request to kick start.

Now Trump has come up with a new plan called four pillars of immigration reform, which have an extra provision for legal status for DACA recipients and others who would qualify for DACA status. According to The White House survey, almost 1.8 million people and later Senate rejected the whole plan.

To full fill DACA requirements, applicants must have entered the United States of America before their 16th birthday and prior to June 2007, currently studying in any school under US law, a high school graduate or be honorably discharged from the military, be under the age of 31 as of June 15, 2012, and not have been convicted of a felony, significant misdemeanor or three other misdemeanors, or otherwise pose a threat to national security. The program does not currently provide any permanent residentship or PR or any option to apply for a US citizenship, nor does it provide eligibility for federal welfare or student aid or loans. As of August 2012, the Migration Policy Institute estimated that more than 1.76 million people could be eligible for DACA.


What are the requirements for DACA application


DACA program is not supported by many states in the United States of America. States like Arizona, California, Illinois, Iowa, Maryland, Michigan, Nebraska, North Carolina, Texas, Virginia have already opposed against the program. They have placed a mixed reaction to the central goverment in Washinton. Many of United States democrats and some well-known republicans leaders, business tycons, college presidents and immigration activists condemned the repeal as a coldhearted and shortsighted effort that was unfair to the young immigrants and could harm the economy of the United States Of America.
Posted by Toukir Rahman