1 Android 11:46 PM
You are thinking of what would be the next Nexus smartphone that can blow your mind, well here it is The Nexus 5 2015 or simply Nexus 5 The second generation smartphone is the upcoming mobile model which is expected to be arrive in late September or early October this year. Where we have seen the Galaxy Note 5 has just released the new Nexus device is now top of our most anticipated devices list. So, no longer waiting for what will be in the LG Nexus 5 here all the information about price, specs, release date.

Nexus 5 2015 Specification
As we all know there is actually no valid source where it is confirmed that what will they coming up with. But, as a screenshot has been posted on a Chinese website Weibo there we can find the specs we could expect form the new Nexus 5. The image indicates it will come with a Hexa-core Snapdragon 808 processor exactly the same chip-set LG uses on its G4 smartphone including 3 GB of RAM and a very large 5.2 inch 2K display and when its about camera you can not forget about Sony, so there will be 13 MP IMX278 camera sensor on the back of the phone. 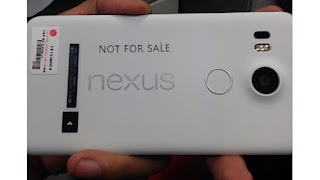 It is also said to be less expensive of the two upcoming 2015 Nexus smartphones, these specs seem a little too good to be true actually. This would almost put the device on par with the old LG G4 in terms of the hardware which price is around $600 USD new and unlocked, and beyond last year's Nexus 6, currently costing around $500 USD new and unlocked.

In case of the specs are accurate as we are expecting, maybe this means that Google is no longer pursuing a lower-cost Nexus series like the Nexus 4 and Nexus 5 at any time, where they are actually focusing on more expensive smartphones just like the Nexus 6. 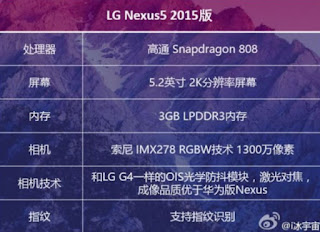 As we all know that USB Type-C and fingerprint scanners are set to become major parts of Android smartphone in the future, but we are still not so sure about the front-facing speakers and as well as metal body. From different sources we found that the upcoming Nexus will not be a specs beast as Google always want its smartphone to be affordable for everyone. So, in that case, a metal body and dual speaker just in front of the smartphone would be a little bit higher in price and luxurious which Google really don't want.

So now as we can expect to be like GizmoChina published more detailed list of specs for the upcoming LG Nexus 2015. They posted the following specs:

They also posted that the smartphone could feature an aluminium frame and a matte plastic back cover but we are not so sure as they didn't confirm about the source of the leaked news. So, the information either could be solid or could be just another rumour.

Looks of Upcoming Nexus 5 2015
As from a source there has been an image of Nexus 5 back cover. Actually, the smartphone has a similar design to what can be seen in the CAD video that we are have given link below and seems to be confirm that a device with the similar design is coming for us.We are yet not sure that is it the exact final version of Nexus 5 or just a look alike.

But, as we can see the device is not similar to the older Nexus version of LG series, but it has been confirmed that the LG Nexus 5 will not based on the LG G4 design. LG is coming with a new look and design and a show off of what the upcoming LG smartphones will look.

There has been a CAD render video uploaded of Nexus 5 2015. It is in line with a previous case render which revealed two circular cut-outs on the rear of the device.

It is also showing that the upcoming Nexus 2015 will come with a fingerprint scanner below a camera sensor just back of the phone, with the camera flash and what looks like a laser-autofocus beside them. It also appears to have a nice USB Type-C port on the bottom, front-facing speakers and a matte rear.

It is looks like a very nice well designed with great features smartphone right now, but as we have described earlier it is still not sure either the price would be less or the hardware.

From various sources in last few months it is said to be released on Ontober. As we actually compare the previous launches of Nexus 5 was on October 31, 2013 and the Nexus 6 on October 15, 2014 that means that the upcoming Nexus 5 2015 is going to be release on October 2015. But, yet not sure if they are following their old trend.

In a latest rumor on the market that Google is going to announce the upcoming LG Nexus 5 2015 alongside with its new Android Pay in October 2015. But, we can not say how much reliable the rumor could be, as the rumor is from a unnamed industry watcher, but we already knew Android Pay was coming with the Android M release, so in case of the new Nexus 5 2015, Android M and Android pay all coincide, as they should then October could be the month of joy where we are getting all three together. 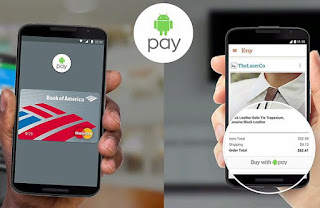 What if you are looking for a Nexus it might be bigger or even smaller but it has be better, but keep that in mind it will be affordable for you.

But, as we can see Nexus LG series are with less price but compare to Huawei device they are expensive and with better specs. If you look for a cheaper but medium powerful device than Nexus would be your choice. 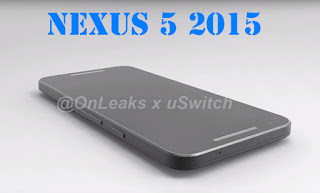