0 review, smartphone, Technology 3:52 PM
What is Oppo Whatto N1?
You might have seen recent childhood TVC by Hrithik Roshan and Sonam Kapoor with Oppo N1, well so you have already heard of Oppo, a brand new Chinese manufacturer responsible for launching the all new bold smart Android phone with blatant disregard for the unspoken smartphone code. Well if you thought similar then, 5.9 inch N1 Phablet is one of the perfect one for you, Now the question is why ? because it is unlike any other smartphone we have encountered.

It is bit of rebel, so you won't get any smaller version of the smartphone, currently the phablet only comes in white color, the back panel is touch-sensitive and the exiciting part is there is not one but you have option for two alternative versions of Android to choose from. Not only is the Oppo N1 is a boisterous rule-breaker, it is doing so with Google's approval there is a limited edition CyanogenMod handset certified by the BIG G itself. I know you don't know what is actually means by CyanogenMod well you don't have to worry, because you will soon know about it. 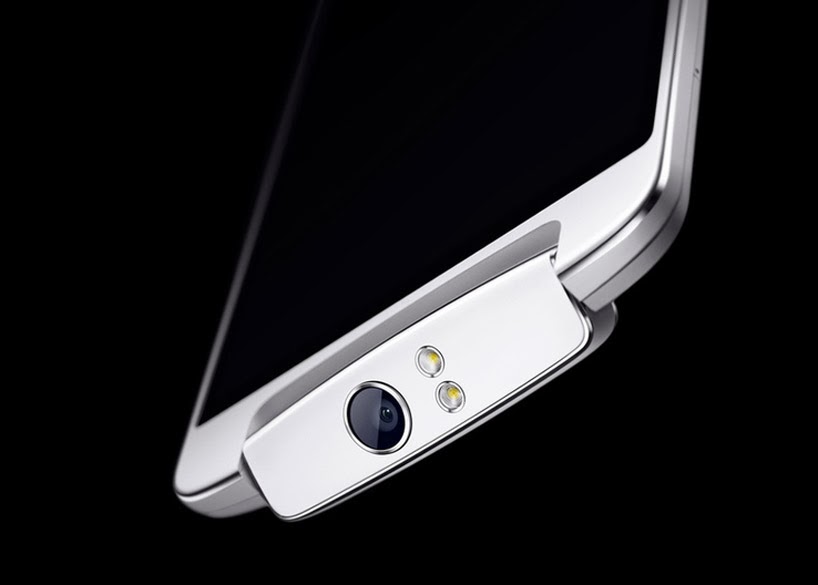 There is actually lot more, Oppo's also completely ignoring the fact that most full HD phones with 13MP cameras, Snapdragon innards and NFC cost a bomb. The N1 isn't that cheap but at $375 is pound-for-pixel an incredibly good value as phablet.

Yes, you can call it the most existing phone of early this year 2014, lets go into deep details about the phone and a little bit more information:

Bigger Screen Better Screen
If you want a bigger screen phone then Oppo N1 is the perfect one for you, because as you can see the screenshot of the phone and as we have told you about the its screen size which is 5.9 inch erlier it is actually massive. if you would like view the whole 5.9 inch full HD slathered-in-Gorilla-Glass-3 screen in all its glory you almost need to step back a little bit. Then you will able to understand its beauty. 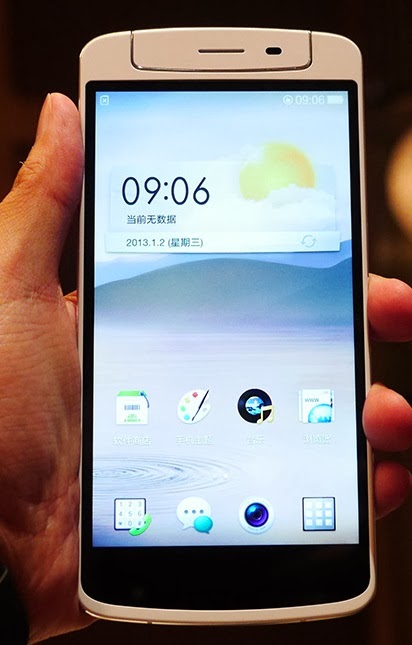 Colors pop and contrast is bang-on whether you are scrolling through pin-sharp text on Tipsglobe, even if you playing any Android smartphone games or you are trying on different themes, look screens and icon packs for size. Viewing angles are very nice and wide as well. So, yes everyone in the self-service queue behind you is now starting at your phone and can see exactly what you are doing. So, you can watch videos, movies, picture all together and don't have to move the phone in everyone's hand to watch it.

There is a small warning for the movie lovers, loading the Oppo N1 up with 1080p videos does make it apparent that the o-mazing Oppo's screen is not quite on a par with, say, an iPhone 5C or HTC One. It is not quite as crisp and punchy as the best one, at 377ppi, and color drift a little to the warm side think suntanned faces. The Galaxy Note 3 gets brownie points in this respect for easily accessible screen modes to suite every taste so nicely.

But don't worry there is lots more to love, though. A double tap turns the Oppo N1's screen on, as with similarly gargantuan G2, especially handy as the shallow power button can be even tricky to find when phone juggling. The Oppo N1 has not even taken up any screen real estate for home, back and settings buttons - glowing capacitive buttons site below the display.

No close-to 6in phone is going to be easy to hold one-handed, but although it’s 9mm thick the Oppo looks and feels sleek, with a helpful, ergonomic curve to the back. At 213g, feeble wrists will start to ache after 20 minutes streaming Archer during a commute, but all in all the screen makes the heft worth it.

Oppo N1 Can Be A Playground
The phone is 5.9 which makes it just more exciting, once the shock of its size has sunk it is very easy to see that the Oppo N1 has been carefully constructed with a lovely matte plastic finish, dual chamfers, slim bezels and yes rotating camera up top with very nicely designed.

The phone comes with 13 MP camera, its a dual LED flash and the small top speaker can be flipped to face forwards, backwards or anywhere in between. Surely, it looks retro but after plenty of time with clean slabs of metal and glass it is a bit of a delight to flip part of your phone around without feeling like an idiot. but as we know it its our new favorite nervous habit.

Oppo N1 have done messing with the outsides of the smartphone, either. Smack band center of the back gigantophones is the place to be right now like fingerprint scanner. 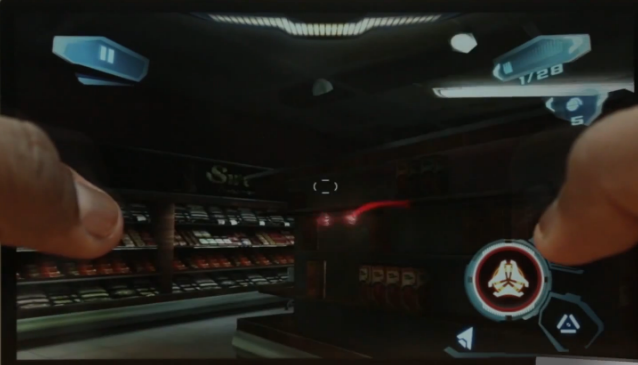 O-Touch panel technology, a PS Vita-style touch sensitive rectangle that can be used as an alternative control, swiping up and down can be used to scroll through long articles in Chrome, for example. In use we found some great settings, such as scrolling, genuinely useful on a big phone, but others, such as tapping to launch the camera, actually took in practice than the standard button. Well that might be something new for us but still using it while we start loving it.

Now there is just one more think to tell about Oppo N1 is the O-Click accessory. This nifty tech button is temperamental with some CyanogenMod compatibility tweaks needed, but it works well as remote shutter for the Oppo N1 camera. You can just press and take your photo shot easily. It can be attached to keys and acts as an alarm to find your phone quickly too. Just like the key of your smart car. Tap on the key to start the car, but here you can tap on the button and play with your phone.

Take or leave the Oppo N1 quirks, but what Oppo N1 does best is let you new experiment with features, themes, gestures even which OS you want the N1 to run.

Two Android is Better Then One
Cyanogenmod comes with Oppo N1 smartphone that you can switch between two android phones. Now here it goes everything super exciting or you can call it super nerdy, depend on which way you look at Oppo N1.

Oppo N1 have its own Android skin, ColocUS, that is already pre-installed on it, based on Android 4.2, and that's not it you also have option to customize overhaul that includes Google Play access and a familiar widgets. Home-screen and app drawer set-up. 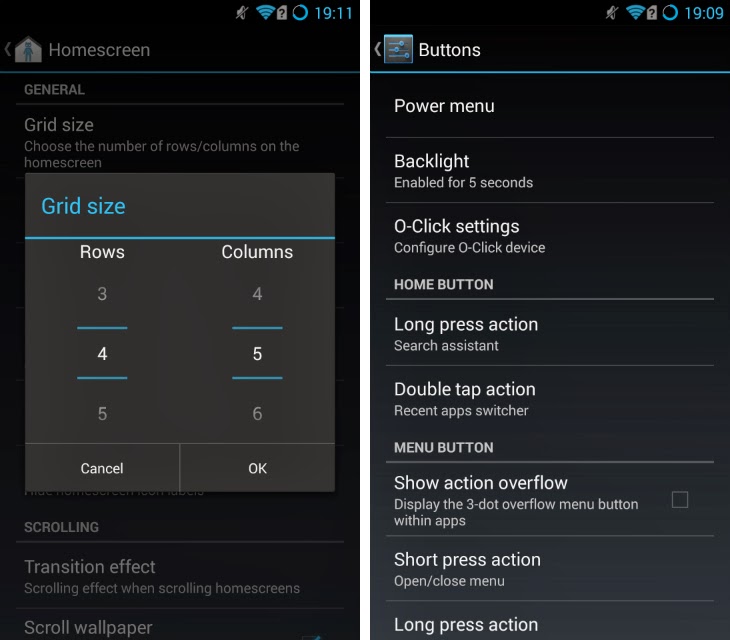 You can use useful tricks include gestures such as swiping up and down with two fingers to control value level, the status bar disappearing unless you nudge it down and a whole bunch of free online themes accessible by swiping up from the center of the Oppo N1. Our theme of choice is the adorable constellation, but you can also choose icons like iOS 7 style, you know, to be ironic. An in-built styles nowhere to be found but handwriting is till an good option with finger scrawls.

As we can see ColorOS is fresh and intriguing, but the big noise over the Oppo N1 comes from Android fans who are bursting with excitement over one of their darling systems going LEGIT through a partnership with Oppo. As we have told you earlier the system is CyanogenMod, and if you can not track down a limited edition CyanogenMod Oppo N1 you can simply install it by yourself. Don't worry, Oppo N1 has done all the legwork, there is no fussing around with drivers, flashing or manual update faffing and you can easily drag the file across onto your phone Macs as well as PCs.

The CyanogenMod is very familiar to stock Android in that, it is fuss-free and runs silky smooth. On the Oppo N1 it is also compatible with the O-Touch panel, Oppo's gestures, and even the O-click accessory, making the dicision to switch very easy. And, in short, everything is customisable for you, extending desktops means more home-screens to play with, you can alter how your battery displays in the status bar, what is on the lock-screen, and grab icons from Android launchers such as Nova. Very open, very phone-geek.

Oppo N1 is another great smartphone that you can easily spend several hours, rather than minutes, tweaking to your exact, detail crazed specifications and discovering all the great new features, both ColorOS and CyanogenMod allow you to do this but we suspect the latter will be on the most Oppo N1 before long. It is a shame you can not flit between the tow, going back to COlorOS involves reinstalling Oppo N1 firmware in the same way so it is bit of a pain. And the one thing we missed completely is a Note 3 style Multi-window feature to make the most of the 5.9 inch screen.

Great Photos With 13MP
As we have explained earlier that two OS is better than one (Android), but a single camera can do multi jobs at onces. A 13MP great photo camera for you that you can move on both side even, you can look at back and front with the same camera by rotating the camera angle. 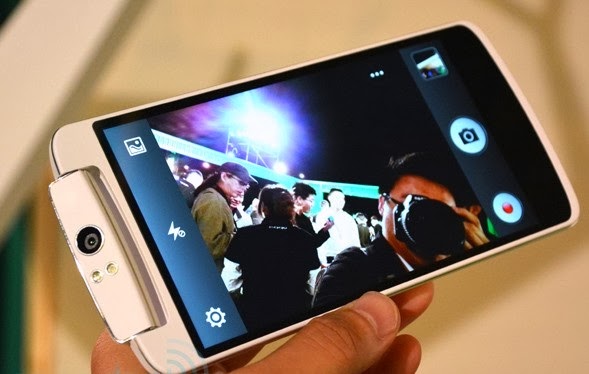 While the 5.9 inch screen is a great viewfinder, ColorOS also offers scene modes, and the rotating section means you can just hold the phone in portrait and tilt the cam upwards for interesting angles. Now you can easily take a a photo with just moving your camera (not the phone). If the phone going to have a Oppo N1 small than, there will be a great way that you can easily take sneaky snaps. As it is, any time the Oppo N1 in your hand there will be gawping and more fun.

A Good Battery Life
A smartphone, that you can watch movies, play games, chat with your friends, talk for a long, video chat, taking lot of photos that all you need right. For all of that you must need a true battery life hero. Because without battery you can not even imagine to have more fun with your smartphone.

Well the Oppo N1 comes with 3610mAh unit, which can not be swapped out, you can play any Android phone very smoothly with 600 processor. So not only does it is 5.9 inch Full HD screen last a full day messaging, browsing and gaming, but in ColorOS mode there is an excellent power saver mode that can save your power and keep your phone alive for a long. The eager to please Oppo N1 will even nag if you get below 40% at night.