0 facebook, Technology 12:23 AM
Facebook has started its journey February 4 2004 and today completed its 10 years. Now its really very exciting for its user and for Facebook that they have completed 10 years of historical social network and we all wish a Very Happy Birthday Facebook. Now as we all know that since the last 10 years, Facebook has been on such mission to connect the world together, it has achieved the mission up to a big extent. Facebook has almost near to cross China's population and even one fourth of the world has one Facebook account.

Since the start of of Facebook we can see that it has become incredibly popular among people. Even a small kid knows about Facebook and starting from teen to older people everyone using a Facebook account. Although, the idea of starting Facebook was innovative and powerful which helped Facebook to grow popular but but it is not the only thing which helped this great social network to achieve the height of success where Facebook is now.Facebook has just changed the world just the way it want it to be. 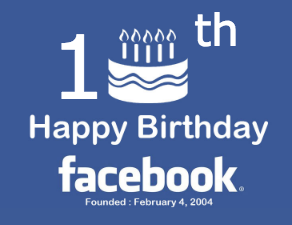 From the starting of the giant social network Facebook has already done very impressive task to understand its users, their requirements and expectations from social world. Since last few years Facebook has already made major and minor updates and introduced many new features too. Some of them failed to work out for its user and some have done a very good job and become very much popular and famous for its users like the LIKE button.

Facebook 10th Birthday Gift For Its Users:
A lookback Video For all users - view your Facebook past with a very nice video and background music.

Facebook Timeline profile - Story Of Your Life, is one of the major update they made, Timeline liked by many users but there are still millions of users who don't want to see Facebook Timeline and want to switch back to the older one for more comfortable with Facebook walls. So, while taking of them we have introduced the new tutorial : How you can easily remove Facebook Timeline 2014.


We all love to be in Facebook and want to keep connected to it all the time as it is one of the best social network since 2004 and World's number one. Anyways, as like us, if you too love Facebook then on the occasion of Facebook 10ths Birthday, you might be very curious to know what the social network have achieved with in last 10 years. So, we are showcasing interesting inforgraphic from dPFoc Canada telling what Facebook has achieved with in these 10 years and what Facebook has bring to us.


The Inforgrpahic have statistic and all information of major updates that Facebook did in a Facebook Timeline style since 2012. After this the Inforgprahic shows how Facebook looked like before 2012. You will also get rough statistics about Facebook users by country, its current monthly active users, visitors, page views, minutes spend, number of fake accounts and more. Finally, the Infographic shows a Facebook Vs Twitter stats and estimated revenue till now, and stating from 2014. It has all the most important statistics of Facebook.