1 facebook, facebook news 5:35 AM
All we all know that Facebook has already introduced its new paper look news feed to latest mobile app,  Now they are launching a new button just similar to retweet of Twitter. Now from all your news feed post, you can tap an arrow symbol to bring up a share dialog box and then you can simply Reshare the post with your friends and followers. Well this works just like twitter's retweet sharing a post again. Many of you should think why not dislike button ?

Reshare is just like share on your own Timeline option on Facebook website and the Share Now option in Facebook mobile apps, but it is markedly different because its one-tap simplicity and its use of the familiar Retweet symbol. Share on your own Timeline, as you can see it Facebook ask you to write a comment before sharing a post you have found, while tapping Reshare is as simple as tapping Retweet on Twitter. Perhaps with more literal name and symbol alongsize it, that is for sure more people will going to engage in this new feature, as Facebook is betting. 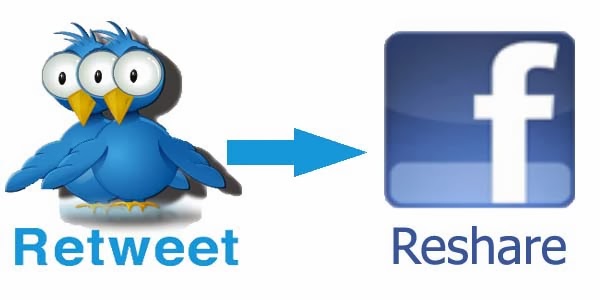 This is the first time that Facebook has cloned a feature from Twitter, which means a feature that Twitter already have, as we have seen in the recent features like hashtags and Trending Topics, mentions to link to friends profile and more features similar with sharing stuffs. Facebook didn't offically launch the retweet button yet so we can not show any screenshot right now, but we can ensure you that the feature is going to be added on Facebook mobile app with in next Monday when the app launches for continued coverage. Facebook has also confirmed that currently they are going to launch the retweet button for mobile apps only, so all other platform users (Desktop users) will need to wait until their next announcement.
Posted by Toukir Rahman