133 cars, Technology 4:18 PM
Have you ever imagine a car with a flying drone ? Renault Kwid goes beyond our imagination bring a concept of car built-in drone system. Currently, the car is in production of French automaker idea of equipping a car with its own surveillance bot that can scan the road ahead and move forward. It is pretty simple to understand the drone will scan the road, traffic, movements, speed, vehicle  and make the car move.

Probably with in the next few years we could see such these concepts that a car is driving it self by drone on the road. In Delhi's auto show, the concept introduced for the first time. The robust looking vehicle coming with a two-wheel drive transmission, protective guards, short overhangs, chunky wings and over-sized wheels. The interiors set to be pretty fine, and the seats give an impression of lightness. The concept also features rear air-conditioning with controls behind the driver’s seat and ventilation through concentric perforations. The steering wheel is centrally positioned on the dashboard with a tablet fitted on the left. And, now it gets interesting. 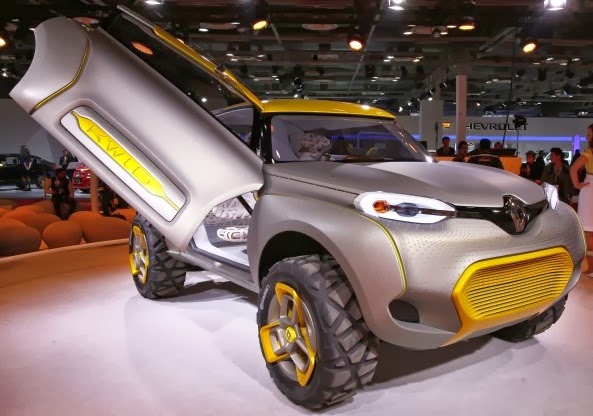 There will be both driving facilities in the car, that you can control the car manually or fly automatically. Yes, this is the first time of its kind in the automotive world. It can photograph landscape, help park, and detect obstacles and traffic jams as well. Not only that like all other technology-rich features cars, the car comes with LED lighting, electronically operated front seats, electric opening doors, lack of gearshift and a 1.2 liter turbocharger engine with a dual-clutch transmission.
Video Of Renault Flying Drone Concept Car

The Renault yet to give the final release date of the car to hit the automobile market.
Posted by Toukir Rahman