Technology 2:47 AM
The world is going to have more smartphone in the future and with moving on this topic Samsung is going to launch its first ever flexible screen touch smartphone. This information has been lacked online, ahead of its debut later this month. Accounting to the sources cited by South Korean news site Asiae, Samsung will launch this smartphone name Galaxy Round which we are guessing alludes to the curved effect of the display.

The report has put the smartphone asking price to be at $900, and also claims that the spec will be closely similar with Galaxy recently tab Galaxy Note 3 and that it will be made very limited quantities for the first time as for trail period.

This chimes with earlier leaks that claimed this was down to low production yields for the screen tech, as well as Samsung's wariness of over committing to technology that has yet to be properly tested with the public. 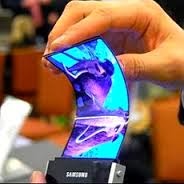 The company, which was joined by LG in making a firm announcement about flexi-screen tech earlier today, has been touting bendy phones as concept devices at trade shows for years.
Posted by Toukir Rahman