0 facebook, facebook tips 5:11 PM
Facebook fake accounts are one of the major problem that even they can't completely remove. It has become a headache for many users as they can not decide and find out which one is true or fake account. There have been many confusion created over the last years among with fake account and the rise of fake friends are increasing day by day.

But in Israel based start up has been finally developed an application called FakeOff which helps you to identify all the fake accounts connected to your Facebook friend list. It can easily detect fake accounts and let you know about them.

The new app developed for the largest social networking platform claims to protect users from scams devised by Fake Facebook users,  who are mistaken for genuine ‘new friends’. “Recent statistics show that at least 10 per cent of about 1.35 billion Facebook users are not authentic. Besides, there are millions of users who create fake identities and appear as regular users,” FakeOff creator Eliran Shachar explained to PTI.

Fake profiles are devided into many different parts like criminals, commercial, hackers, psychological and many more, that can easily risk reputations (identify theft), children (paedophiles and sexual abuse), property (home break-ins) and personal safety, he added. “FakeOff app uses sophisticated algorithm to investigate the behaviour of suspect ‘friends’ and rank them according to 1-10 credibility score. It scans up to 365 days of timeline activity for every suspect Facebook friend and checks for abnormal activity,” Shachar explained.

The app works perfectly with Timeline activity of the suspicious and tries to locate abnormal behavior acticities that is way far from normal humans. It also allows the user to easily scan the photos of the suspect to find out if it was copied or stolen from anywhere online, FakeOff crosses information from all investigations and calculates results of user based on other investigations on the same suspect, he said. FakeOff has been live for two months now and has over 15,000 users so far. explained by him. 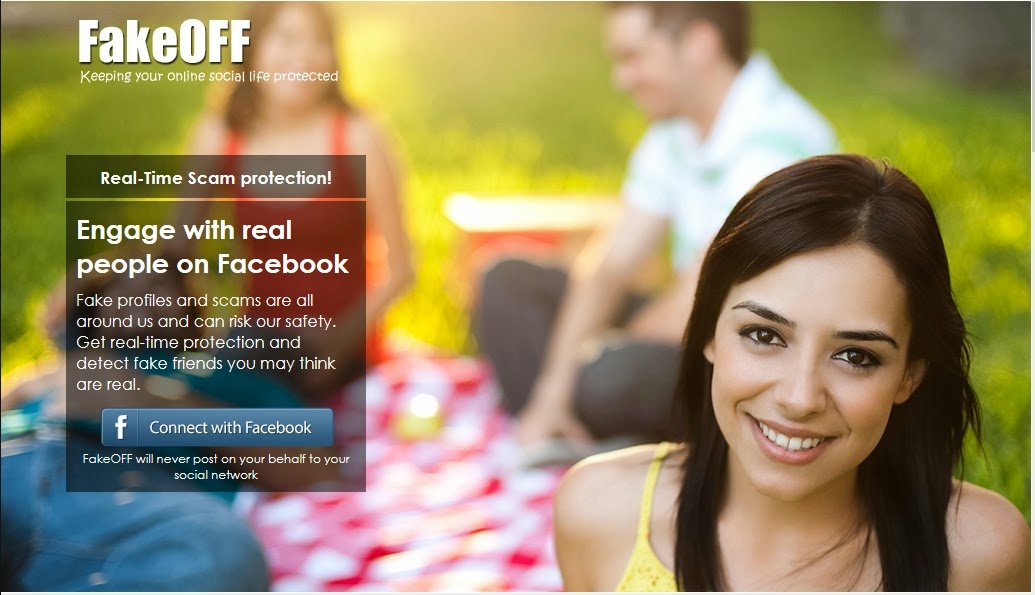 “Twenty-four percent of investigations conducted in the app return as fake. A fake profile can be very complex and some of the fakes that we help the users find is only for their eyes so we can’t know the final result from the photo scan results, but the user easily can,” he explained, and according to Facebook statistic, about 15 million accounts around the world are suspected to be false or duplicate, and among them the major chunks are from developing markets like India and Turkey.

So, here are are going to explain you how you can add this app to your account:

Step by Step Guide How To Use FakeOff
Step 1: First you will need to allow the app from here.
Step 2: Now on the app page click on Connect to Facebook. 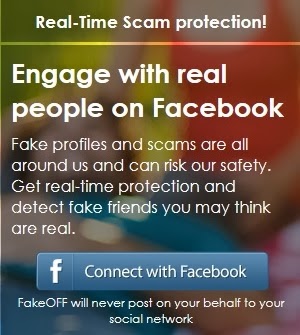 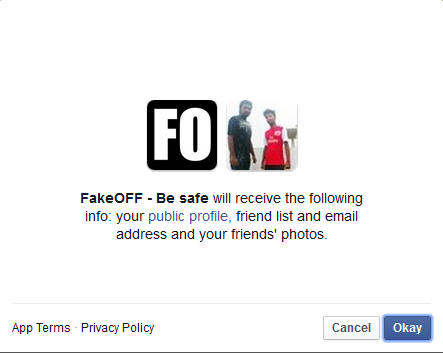 Step 5: The app page will show you all the friends from your friend list, now click on Let's check her just below the photos of your suspected accounts. 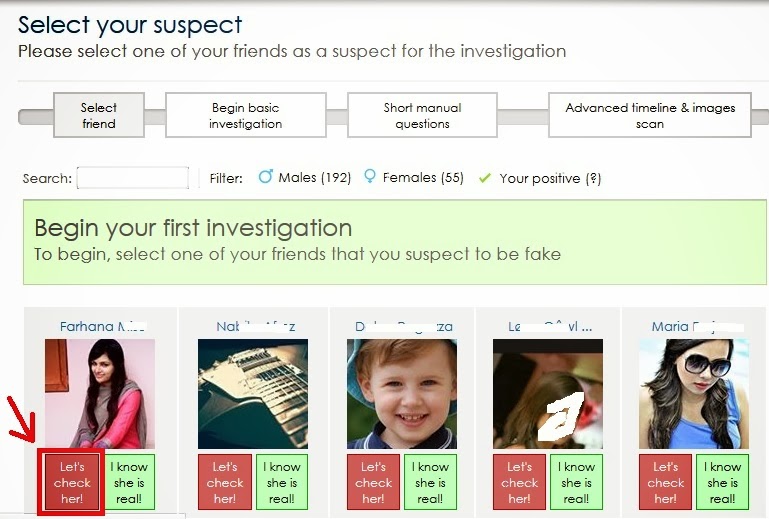 Step 6: click on START BASIC INVESTIGATION to let the app identify either the account is fake or real. 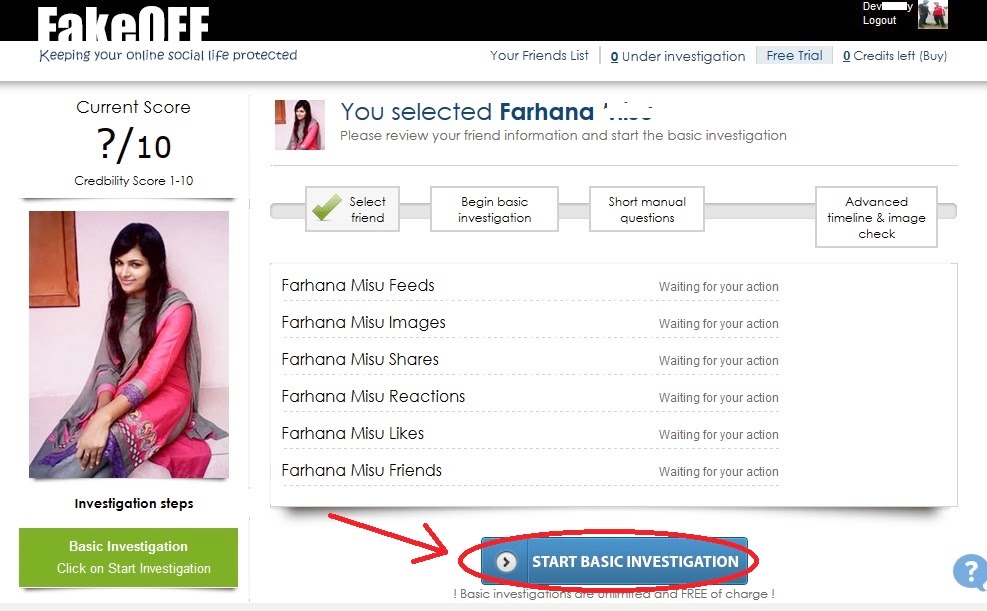 Step 7: One more time allow the app to access your profile information (step 3).
Step 8: Now you will be asked 3 questions and you need to select from the multiple choices given and click on SUBMIT AND GET BASIC RESULTS. (You will need to wait around 3 to 5 minute to complete the investigation.) 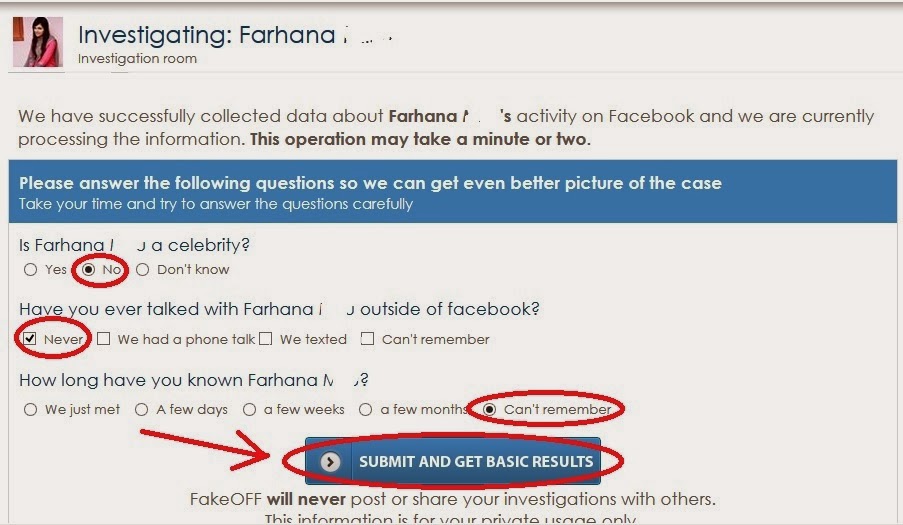 Step 9: Let the app Analyzing all data for basic investigation results.This process might take a minute. You will have a final score to let you know either the account is fake or real. 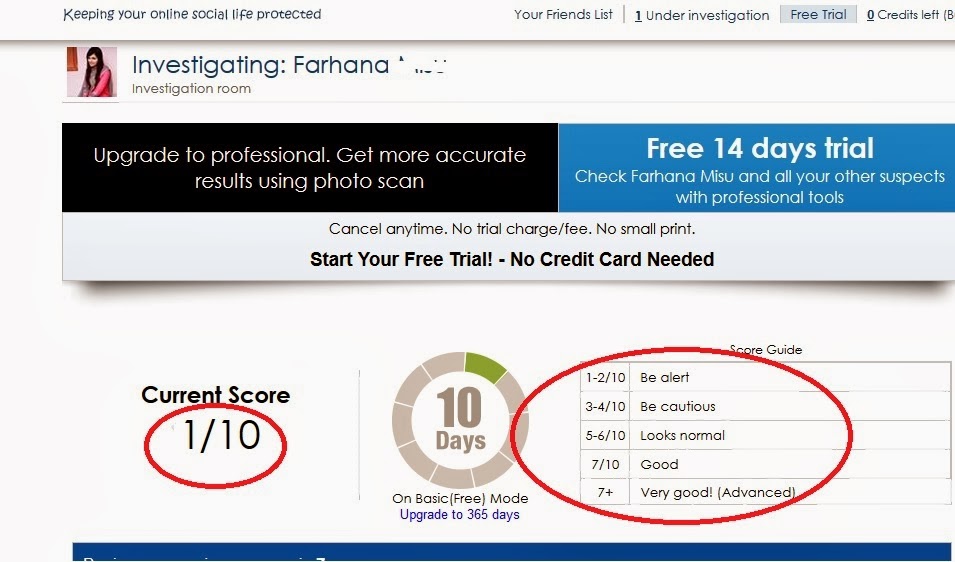 If you know any other app that let you identify fake account feel free to share with us via comments.