0 facebook 2:46 AM
Can you even imagine how much users the giant social network have. Well the population has cross more then the limits which is even more then the population of India that squeezing them all into one Web page seems almost impossible. And yet someone has made it possible.
A new project(app) called "The Faces Of Facebook" a billions of hearts collects more than 1.27 billion Facebook profile and photos on one site and still going on. Arranged in chronological order according to when the person joined Facebook. Users also able to pinpoint their photo on the page and will able to see where they show up in relation to their friends.

At first time, the site looks like colorful, pix-elated white noise. But users will able to zoom in to see individual photos and then just scroll around or click on a photo to visit that person's Facebook profile.(Please wait sometimes as the page is experiencing heavy traffic from all over so it can be little bit slower) 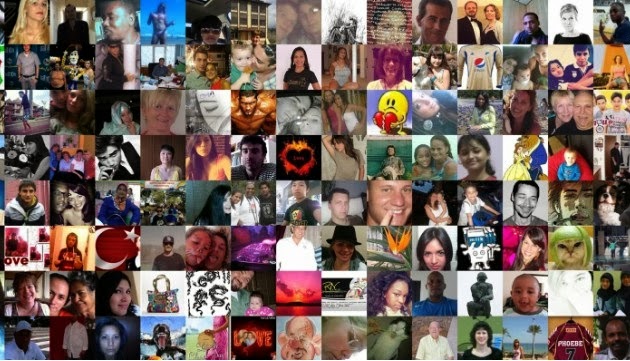 The apps launched last week and was built by Natalia Rojas, a self-described "creative technologist" from Barcelona, Spain.

"I was playing around with Facebook API, and I discovered that there is a way to access everyone's public information with a very simple (but not obvious) algorithm," she said in an e-mail to CNN. "At that time, I thought I could do something beautiful/interesting with that, like showing them all together. Then I started to write the code to achieve it."


Rojas said she is not breaking Facebook privacy rules because she is not storing anyone's name, photo or private information -- just linking out to public Facebook profiles. She also said she hasn't heard from the social network, which she thinks is good news because "I was a bit worried about things like using their name in the URL."

Rojas said it took her a year and a half to code the site. The hardest part, she said, was stripping out the default silhouette images that appear on some inactive Facebook profiles.
Asked about her hopes for the project, Rojas said she was inspired by the idea that each Facebook profile photo is an example of that person's best self, and that millions of those images together combine to present a positive, universal message.
"There is a mix of people from all over the world. And somehow we are all telling our friends: 'Look, this is me, when I like myself.' Feeling happy, being creative, looking good, being passionate about something, proud of something, enjoying the life," she said.
"So I think, why don't we try to BE our Facebook profile picture? Even if life is difficult some times, there is always a way for us to be what we want to be: happy."