iPhone 5 VS New iPad Mini Whats Apple Will Bring Us Next ?

0 apple, ipad mini, iPhone 5 7:15 PM
If you are endless fan of Apple's iPhones or iPad well then you must be thinking what will Apple going to bring us next ? is it going to be iPhone 5 or New iPad mini. Well over net there are so many rumors going on about iPhone 5 and also iPad mini. Even some are saying the next iPad mini will be cheaper like Amazon's Kiddle Fire. Well till now Apple officially didn't anything about iPhone 5 or iPad Mini officially. So, we have to wait till the day that Apple will announce the launch date.

Now lets take a closer look what Apple can bring us next with upcoming iPhone 5.Apple next sixth generation iPhone 5 or whatever they will ends up calling it is nothing but an assumption till now but if release shedules hold to pattern, we should see it by the fall of 2012. So, i guess we will not have to wait much longer for the release of next iPhone 5. Well, currently as rumors and feature wish-lists include a 4-inch screen, more faster Apple A5X chipset, real 4G LTE networking and of course as Apple do with all its produces more thinner and lighter then the last version iPhone 4S. Storage, pricing and availability are all uncertain till now. 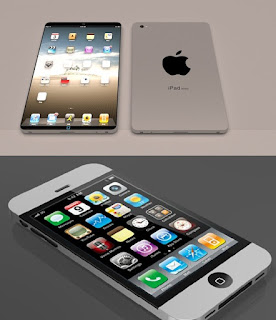 Now lets come to our next Apple product iPad Mini or whatever they will call it. Well in most of the rumors it has been cleared that everyone is focused on size namely a bigger iPhone 5 and smaller iPad mini. If that really happens then how will those devices fare against rivals like Samsung Galaxy S3, Google Nexus 7 or even Amazon Kindle Fire. Well so it is clear it is not going to happen that all. So, if you heard any rumors similar to these don't believe them till Apple announce the release date and information about iPad mini.
On the iPad front, the New York Times has joined the Wall Street Journal and Bloomberg to report that Apple is prepping a 7.85in iPad that will sell for "significantly less" than the current Apple tablet.
Over the last week, a website called GottaBeMobile.com posted photos of iPad mini and engineering photos. They show a tablet and called it iPad mini which is much thinner and smaller than the current iPad with the rumored 19-pin dock connector also with two speakers inside instead of one as current.
On the other hand we have found a Chinese blog Apple.Pro posted photos of what it claims to be the next generation iPhone frame with a centered FaceTime camera, 9to5 mac noted.
Posted by Toukir Rahman