0 facebook, facebook news 1:07 AM
Do you think everything that you post were seen by all your friends. Well if you are thinking every time that you post a status update all your friends can see it on the top. Well, then you will be very surprised to know that only a few of your friends will able to see your status updates, and the percentage is only 12. Now Facebook is going to introduce you to a new "Highlight" feature which you can use to show your status updates to more friends. Now the important fact is this new feature is not free, as we all know all of the Facebook features that we use are free of cost. But this time if you would like to use "Highlight status updates" feature then you will have to pay a few dollars. But, that can also be any of your post. It can be your status, photo, share, notes, links and others as well. On the other hand this new feature is only applicable for users not for any Facebook pages. So, now what you will get if you spend some few dollars for your posts, well then this new feature by Facebook is that your friends would see the status update in the top of your news feed as the first position whenever they logged in to Facebook. Not only that as it is featured post that means it will be colored or made look different then other posts. Currently, Facebook is running a testing mode for this new Highlight feature is now in its beta version. So, only few users will able to test it and know whether people are liking this feature or not.
How much i will have to pay to use highlight an important post


We have collected a screen shot which will show you how this feature would looks like when it will be available for you and everyone else. All you need to do is that you have to pay a small amount of money to Facebook and then all of your friends will see your update on top of their news feed as a featured item. 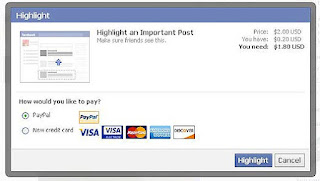 This new feature simply proves that now Facebook is trying be more aggressive to make more money for its investors to get delighted. It might be a caused by Facebook IPO. Well, now that can lead to a bad impressions on the users as Facebook has always made simple statement that they will remain FREE for all its users forever and everyone is equal for them. Now this is some kind of pay-for-popularity feature could be a huge turn off. This might also affect Facebook current popularity and also harm users that lot of users will try to pay using illegal ways. Also, for those who will not able to pay will think them self that their updates will be no longer important. Facebook should know updates are not like search engine results. Almost all users do not use there credit cards or PayPal accounts on Facebook but we can consider this as a forceful action of Facebook to earn.This feature would also lead to insecurity in the minds of users because many scams  applications will copy this way and try to get the credit card details of the people.

Official Statement Of Facebook About Highlight An Important Post Feature:
“We’re constantly testing new features across the site. This particular test is simply to gauge people’s interest in this method of sharing with their friends.”

The problem is the potential for Highlighted updates to reduce the general relevance of the news feed. Facebook’s news feed sorting algorithm is designed to show you posts by your closest friends or that have received a lot of Likes and comments. Highlight distorts this, and will encourage news feed spamming club promoters, musicians, small businesses, or anyone else with something to gain from more clicks.

Now the question is will that affect you or any of your friends ? let us know thought comments.
Posted by Toukir Rahman