0 apple, facebook, facebook news, ipad, iphone 1:54 AM
Now a days Facebook seems to be very aggressive in their business. A few months ago Facebook has announced that they are planing to acquire photo app company named : Instagram for $1 billion, now they have released a new iOS app that almost looks and functions are identically to Instagram'. You can simply download the iOS app and see your self if you have already used Instagram.

Facebook has also released Facebook camera which is available in the App Store for free. Facebook Camera app let you take and upload multiple photos including all other features as explained above. sincerely improves upon the photo capabilities offered by Facebook’s primary app for iPhone and iPod touch devices.

If you have already used the older version of Facebook in your iPad or iPhone then you will see a big difference in this new version. Well, in the previews version you had option to upload only one photo at a time. But in the new version which is similar to Instagram. Well not only that now you will able to see all your friends latest photos in a single scrolling feed. You can also now simultaneously upload multiple photos to your Facebook albums.Also just like the Instagram app, this new Facebook app allows you to crop pictures, rotate pictures and also apply filter to your photos. 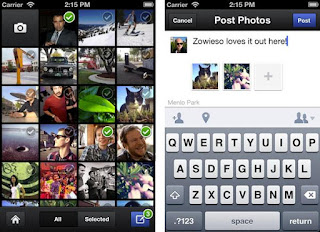 Interestingly, none of the app’s 15 filters were developed by the Instagram team, Facebook product manager Dirk Stoop told The New York Times. The app, the Times suggests, has been in development for much longer.

Facebook camera app is the second mobile app dedicated to one of Facebook's key features. the first one was the dedicated messaging app by Facebook which was released last April. I think Facebook really improving the mobile apps so that Facebook's mobile users will feel more comfortable while using Facebook in mobile phones. Facebook simply has too many features and tools to bundle into a single mobile app. Well It’s likely more such apps will be released this year. In an address to 200 investors leading up to Facebook’s IPO earlier this month, CEO Mark Zuckerberg said that mobile is Facebook’s number-one priority.

Now you stay with us to get more updates about Facebook.

Share it with your friends.
Posted by Toukir Rahman