0 facebook, facebook news 8:54 PM
The latest news about Facebook is that Facebook Inc and banks also with Morgan Stanley are sued by the social networking top leader's shareholders, they have claimed the defendants hid Facebook's weakened growth forecasts ahead of about $16 billion initial public offering.

Mark Zuckerberg the founder and CEO of the most popular social network defends, he were accused of concealing from investors during the IPO market process "a severe and pronounced reduction" inside revenue growth forecasts, this is because of massive increment of using app or website though mobile devices. Facebook has finally went public last week.

After discussion and processes completed, lawsuit was filled in U.S District Court in Manhattan on Wednesday, from a private law firm for the plaintiffs. A day earlier, a similar lawsuit by a different investor was filed in a California state court, according to a law firm involved in that case.

As we also have heard about the New York case, all the shareholders of Facebook Inc have said research analysts at several underwriters had lowered their business forecasts for Facebook Inc in the time of IPO process, but some changes were "selectively disclosed by defendants to certain preferred investors" rather than to the public generally. 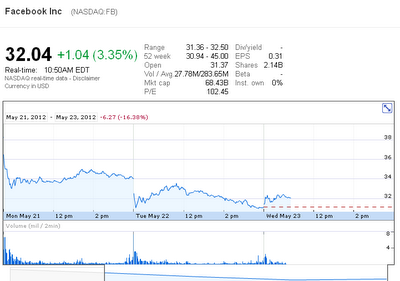 "The value of Facebook common stock has declined substantially and plaintiffs and the class have sustained damages as a result," the complaint said.

As a result from Facebook and Morgan Stanley their representatives did not immediately respond or say thought any kind of comments.

Facebook shares fell 18.4 percent from their $38 IPO price in the first three days of trading, reducing the value of stock sold in the IPO by more than $2.9 billion.
Posted by Toukir Rahman