0 apple, ipad, ipad 3 3:29 AM
We all are expecting when Apple will going to release or launch the new iPad 3 or iPad HD from different sources we have got two different release name. Well, we are going to be sure about the release and all updates of features of iPad 3 or iPad HD today 7th March 2012 after the successful event of Apple iPad 3 March 2012 event.

An anonymous source from an Apple Store claims that there are big preparations underway to start selling the iPad 3 on March 16 2012.But still this is a rumor as there is not official announcement made by Apple about the iPad 3. We are still trying to explode of upcoming iPad 3 or iPad HD updates and release date. Apple has a tendency to get their products into stores very shortly after announcing them. Most of our sources suggested March 30, which is an uncharacteristically long wait, but one way or the other, you’re probably going to be able to get an iPad 3 before the end of the month. 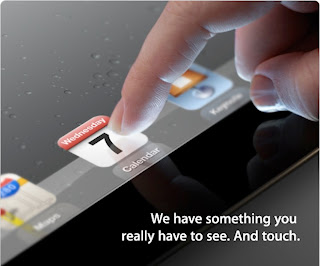 Well, i guess we just need few more hours so that Apple announce the iPad 3 release/launch date and all its latest updates and features today at Apple iPad Event 7th March 2012.
Posted by Toukir Rahman