0 apple, Apple Store, ipad, iphone, Ipod, Mac 2:43 PM
Who don't know angry birds, this time Angry Birds Space is coming for you on iOS and Mac. Angry Bird is the best selling mobile game of all time with more then 10 million users a day, The latest version Angry Birds Space has finally arrived. Rovio, the developer behind the series, partners with NASA, the U.S. space agency is going to promote the new release of Angry Birds.Not only this they are going to plug filmed by an Angry Bird-toting astronaut on the International Space Station.


Angry Birds Space delivers the biggest change yet in the series' well-known "launch birds out of a slingshot at pigs" gameplay. Instead of dealing with the gravity of just one planet, players are dealing with several. Kotaku explains:

Yes, you still play level by level. You still have a set number of birds—birds of different types—that you'll slingshot at towers of blocks, hoping to squash some pigs.

But now you're shooting your birds through space, from one planet to the next. Each planet has a gravitational field. Gone is the simplicity of just lobbing a bird in an arc. No. Welcome to the physics of the heavenly bodies. Shoot a bird into open space and it'll fly off in a straight line. Shoot one toward another planet and it'll get caught in its gravitational field and start orbiting the planet... or slowly descend as it encircles the planet to smash into the ground. 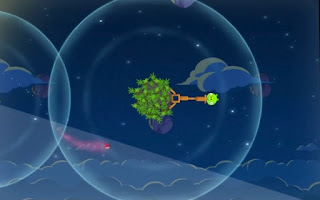