0 facebook, facebook tips 3:06 PM
Facebook has become one of the largest and biggest Social Networking Company over the years in the world. That is not the only thing Facebook has also assumed to reach more then 1 billion mark this year that is one sixth of the world population. Now a days everywhere competition is going on and competitors are up to date.Therefore to achieve something bigger it must have to be something about it.True, the completely user friendly interface in addition to various features makes the users so much interested in the social networking site that its time on site has been increasing ever since.Now recently Google also rolled out its networking site Google+. So facing competition , Facebook had to introduce new features as well. It all started with f8 conference where Facebook launched Timeline which were later accompanied by other features like ticker, video chat, spotify, new photo viewer, timeline for pages etc. Some of the new features were launched as the rivals Google plus offered the same.

Now all you need to do is follow the below steps by steps procedure to add photos to Facebook map:

Step 3:Now on the right side click on Add Photos To Map

Step 4:You’ll now see your uploaded photos in a film strip-style display at the top of your map page.  Clicking an image will give you a “Where was this?” text box. You can also scroll and add see all of your photos. All you need to do is hover over the images and scroll using the scroll button of your mouse.

Step 5:Now Start typing the location and you can select the correct one from the list that appear. 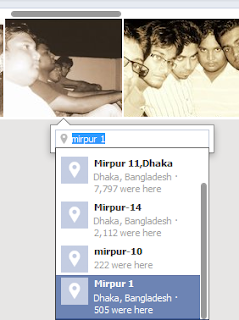 Step 6: Now you can enter maps to all your photos. 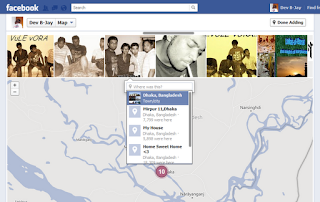 Step 7:After adding photos to Map. Pin will appear on the places you have marked. Just click on the pin and you will see the photo which you referred to that place.