0 apple, ipod nano 1:44 PM
Well that is obvious if there is any Apple product we all are very excited to know about it ? so finally Apple is going to make a new version of the most popular music player i-Pod Nano well in this new version they have more features rather then the old one but it will look similar to the touch model patented in 2009. A Japanese Apple based web blog has leaked different pictures based on the new version of Apple i-Pod Nano. Well we always know apple comes with something special.

This would be the seventh version of I-Pod nano.As news there will be more functionality and features in the new version with touch screen option and 1.3 MP camera as well. If you are thinking about the size well then the size will be as same as the I-Pod Nano Shuffle released in 2009.

In the fifth generation, i-Pod also has the touch screen and camera feature but the device was relatively bigger in size.So, now you will not need to worry about the size anymore. 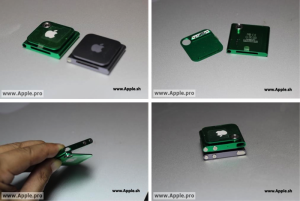 
In the six generation they have finally removed the touch screen and camera feature in order ro minimize the size. Well now you don't need to worry about you don't have touch or camera functionality on your i-Pod.

In the new I-Pod nano Shuffle version - there will be Wifi, 1.3 MP camera, Touch Screen and more but the release date isn't confirm yet.
Posted by Toukir Rahman