0 apple, iphone, iPhone 5, iphone SJ 2:22 PM
After a long waiting we thought we might get iPhone 5 but Apple announced the iPhone 4S. Now as we all know iPhone 4S has already arrived next to our doors , iPhone 5 (or even whatever apple will call the next generation iPhone), concept designs are once again starting to pop up around here and there. Designer Antonio De Rosa, who have created a very nice iPhone 5 concept design we have posted the image below.Its title is iPhone SJ, as it is Steve Jobs inspired. Antonio De Rosa imagines it will come with an super fast new A6 processor, with more powerful camera 10 Megapixel, and also with polycarbonate body. I don't think that a better processor like A6 and a better camera like 10 Megapixel are out of the question for the next Generation iPhone 5.

I guess polycarbonate would be a bad choice for the body as its extremely lightweight. Because if the weight is less then there is more chance that will fall from out hand. But it is true if they make it larger device and subtract weight then yes that will be well enough and will be a great choice. I would not consider to have a larger screen as that has its lot more disadvantages. But if you think about the overall design and concept then its really simply mind blowing but i am not sold on Apple making a larger screen that would inhibit one-handed use. You can visit ADR studio's site for more images and view more great designs. 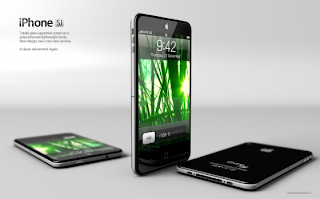