Facebook Status: Facebook has made some changes to status updates this year. There are total seven major changes they have done example : Increased Character Limits on status.Facebook data scientists kept their eyes focused on tracking the key trends among millions of status updates regularly in Facebook.

Facebook has finally released that research results late Tuesday night in their end of year Memology list, which each December since 2009 has helped users to understand the most popular topic in the year, cultural trends and acronyms on the site.

So, as Facebook results the death of Osama Bin Laden one of the top topic on Facebook status and become the largest popular status in Facebook history. 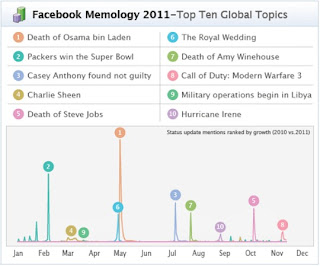