0 app store, apple, Download, downloads, facebook, Games, google, mobile, mobile applications, skype, Software, Twitter 6:55 PM
We always want to see a list who is on the top ? millions of people around the world daily download millions of apps. But Angry Birds has made a record this year that Angry Birds become the most popular game and is the most downloaded mobile App of 2011, rounding out the list of top 10 apps used by mobile phone users and downloaded this year ahead of Facebook, Twitter and Fruit Ninja.

From a new report from mobile analytics app company Distimo - Angry Bird made the lost not only once, but three times, thanks to its other version Rio and Seasons editions.

There are millions of mobile apps available for download across the top seven major app stores, the iTunes App Store is still on the top position only with the iPhone alone, it brings in about four times the revenue generated in the Google Android Market. Meanwhile,the App Store for the iPad rakes in more than double the revenue of the Android Market. 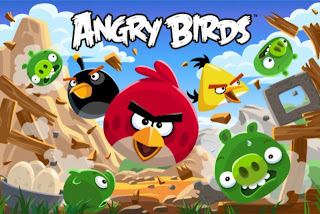 So, now as for our discussion which are the most popular downloaded top 10 mobile apps in this year 2011 here goes the list :