1 facebook, facebook news 2:55 PM
Facebook acquisition Gowalla of the location sharing service seems to be a mistry as they said its just a rumor. Both of the companies has replied when they get thousands of email about the confirmation. Both of the companies replied that they do not comment on rumors and speculation. Few days ago CNN story has reported that even without even having any record or proves.

CNN news: most of the workers and staffs of Gowalla location services are moving to Facebook headquarters to work on the new profile timeline, this is the newest advanced profile still under beta version. 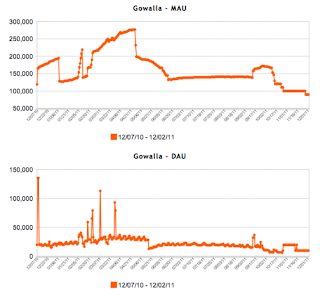 Gowalla started its journey in 2009 and has ammassed only 10,000 users connected to Facebook, compared to 560,000 archrival Foursquare.Gelocation service owned by Facebook has undergone repositioning since launching a year and half ago, lending a wee bit of plausibility of an acquisition of Gowalla, which has also had its own repositioning.

Facebook will need to pay $30 to own Gowalla according to news.Yet this is all speculation, since both of the companies has denied to reply or give comments to any rumors about them.
Posted by Toukir Rahman