Olla Condom Ads On Facebook As A Friend Request

0 facebook 12:53 PM
Have you heard about Olla Condoms, but if you are a Facebook user you might get a friend request asking "Avoid surprises like this one. Use Olla Condoms" which may be very interesting and its a very good way for marketing a product like condom but this is also violation of Facebook policy. Facebook actually do not allow such marketing ways and this type of ads at all.

This is actually a fake profile theory for marketing their product, the promo video for the "Unexpected Babies" campaign from Brazilian agency Age Isobar details the ad's concept: take a make user's name, create a new profile using that name with "JR" attached at the end, and send a friend request to the unsuspecting user, when he visits his virtual son's profile, he sees a condom ad from Brazil-based condom Olla. 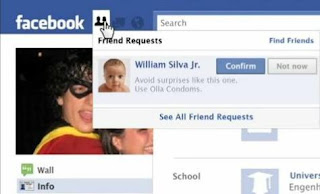 But Olla condom ad campaign appears to violate several policies found under "Registration and Account Security" in Facebook terms, and Facebook Help Center even has a section to report fake accounts that "list a fake name" or "Don't represent a real person."


Sometimes fake accounts create a entertaining zone for people, but they more often than not lead to unwanted consequences. Earlier this year, one woman unsuccessfully used a fake profile to dig up dirt on her husband - and instead found herself in a fake-murder plot.
Posted by Toukir Rahman