1 facebook 7:53 PM
Facebook has now rolled out its new Timeline feature to all of 800 million users on Facebook network. As we all know Facebook is the largest Social media in the world and users are very active.If we think about the new advanced Timeline profile it really has some interesting features and more useful tools that we can use to a snapbook of our Facebook life to our friends. Many of the users on Facebook are finding it too complicated to use the new advanced profile and cluttered with the advertisement and news ticker on the right hand side. As i have seen lot of annoyed users are searching each and every single second to find out a way so that they will able to disable and get rid of the Timeline feature. Some people even request and sending messages to Facebook to stop their Facebook timeline update. 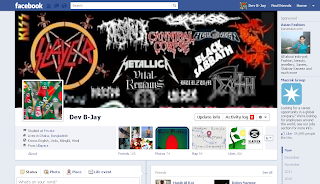 As we all know now the Timeline has been released for all the users of Facebook, Facebook has announced that Timeline will go live automatically after seven days, no matter if you like it, or don't like it.Timeline is here to stay, at least for the new few months it won't go away from your Facebook life. Unfortunately, till now we have just found one way that you can switch back to your old profile but it is just an temporary solution.
Temporary Solution for Disabling timeline - Disable Remove Deativate Facebook Timeline Using a Simple Trick

As Facebook said earlier "Once you click “Get Timeline,” you will have seven days to review everything that appears on your timeline before anyone else can see it.
If you choose, you can publish your timeline right away. If you decide to wait, your timeline will go live automatically after seven days. Your timeline will replace your profile.
Eventually everyone on Facebook will be rolled over to timeline."

You have no choice, but are forced to get used to the new profile layout. When Facebook has released its new Facebook News feel and Live ticker tap where you can see your friends updates and latest stories. Everyone was saying the same thing as they are saying now about the Timeline that they hate the new updates. But as we all know users had no choice, but to accept it.Few users even said that they would deactivate their Facebook account and switch over to Google Plus social network.

However, that didn't actually happened, as we all know people are used to with Facebook so it is really hard to live such a place where people are staying since years. Now we can see the same set of users now "liking" the Timeline. Such straightforward statements don't bother Facebook, since they know that people will eventually get used to it with in a very short time.

If you are finding the new layout is too tricky for you, and you may like to disable it, as we all know there is no option that you could disable it only one trick can work and you will able to switch back to the old profile. Also we had posted an article earlier on How you can disable the news ticker on the right side of your Facebook homepage.