Home » apple » ipad » Ipod » ipod touch » kindle fire » tablets » iPad vs iPod touch vs Kindle Fire: Which one you should get?

iPad vs iPod touch vs Kindle Fire: Which one you should get?

1 apple, ipad, Ipod, ipod touch, kindle fire, tablets 4:02 PM
Comparing, costing, hardware, features, software, applications between iPod, iPad and Amazon Kindle Fire.
Are you thinking of buying a new tablet or you wish that you could do everything easily though the ipod but still you are confused about which one should you get ? are you confused comparing each of them ? So, you might like ipad look but too cost ? Amazon kindle fire cheap but confused because of the hardware ? ipod will you able to work on it properly as you like to it to do.There’s a lot to consider — the quality and dimensions of the hardware, the features and flexibility of the operating system, the availability and diversity of the content, the difference in cost and value, and we’ll take you through all of it, point by point, to help you decide. 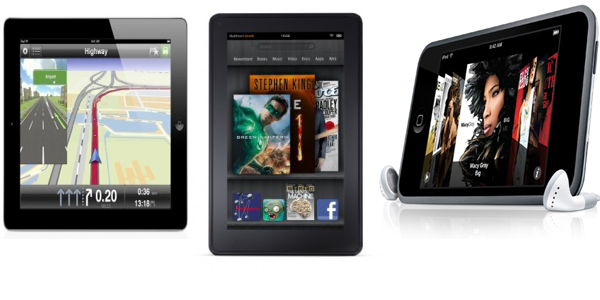 If you are outside of U.S ?
First and the most easier is simple geography.If you are living outside of U.S then Amazon has limited support that might as well be non-existant.Apple by contrast has good support for apps and increasing support for music, movies, and more around the world.
So, the points are location:
So are you thinking about the costing ?
If you think about the price then iPad is doubled then the Kindle fire.If you have only $199 only then you should take Kindle or you should go for the smaller version iPod Touch.
So are price ranges are:
Bigger and better ?
If you think about the iPad then yes it has bigger display then the other two. iPad has a 9.7-inch screen and on the other hand kindle fire has 7-inch screen.But if you think about the ipod it has a little screen 3.5-inch.iPad is better for running more expansive apps and immersive content, the iPod touch for more on-the-go, interstitial use. The Amazon Fire is a great compromise between the two size.
So whats the difference are ?
Internet Options ?
So, if you are thinking about a portable device you must be thinking of using internet in it even when you are out from your home, work, school or other Wi-Fi hotspot. As we all know internet is one of the important source for us now a days. So, if you thinking about the connectivity then iPad has 3G option.If you do not have easy access to a Wi-Fi or tethering, Kindle Fire and iPod touch go offline.
So what about the hardware?
iPad design is very good amazing fit and finish and is absolutely best in class in most areas, with the notable exception of the rather pathetic front and rear cameras. The iPod touch is similar, though has a lower screen technology (no inter-plane switching) to keep costs down as well. The Amazon Kindle Fire uses the BlackBerry Playbook chassis which is great but not Apple great.
So what about Software ?
iPad and iPod touch is running on iOS operating system which has great advantages, including also the great features which others don't have like FaceTime for free video calls, tons of great built-in apps, and Safari the best mobile brwoser in the business right now. Amazon has built in special version of Google's Android Gingerbread OS specifically tied to the Amazon store and to best show off Amazon Store content. But it doesn't have the Google's apps like Gmail, Navigation or market.
Support System ?
Apple has great support till now. Apple has retail stores throughout the U.S and in many cities around the world. Also a great online and phone support, ability to walk into an Apple Store and take a free class on how to setup and use your device or get a Genius Bar appointment to fix it, can be invaluable. Amazon is the world's largest online retailer with a stellar reputation for online support.
Apps and games ?
Apple still has the most apps in mobile, including over 100,000 specifically built to take advantage of the larger iPad screen and over a half-a-million for iPod touch. If games are a consideration, the App Store typically gets them first and with the best, most fluid graphics. Amazon has built their own version of the Android market with less content but arguably better curation than Google’s.

Both the iPad and iPod touch have been on the market for years and have tons of great cases and other accessories available. Also, Apple allows accessories to connect via dock port, Bluetooth or AirPlay, meaning you can connect your iPad or iPod touch to a wide arrange of gear and gadgets, everything from cars to cameras to Apple TV, to special-purpose scientific instruments. Amazon Kindle Fire is just hitting the market so it will take a while for a lot of accessories to come out.

There will likely be an iPad 3 sometime next spring, potentially with a double-density display and other hardware improvements. There was no new iPod touch this year but there might be one next fall. Both, however, are mature, well supported products and if you want either now, you’ll get a great device now. The Amazon Kindle Fire is a brand new device and inarguably an immature one at this point. Amazon will no doubt introduce a new, hopefully much better, hopefully much more internationally supported, Kindle Fire sometime next year. If you’re not dying for one now, you might be better off waiting.

So the bottom line is ?
While this is an iPad and iPod touch blog, and we’re no doubt biased, the Amazon Kindle Fire is so new, so U.S.-centric, and so obviously intended to be little more than a front end to the Amazon Store that it’s tough to recommend. Future versions could be outstanding, but right now you have to really not want an iPad or iPod touch, and really want an Amazon tablet to get the Kindle Fire.