0 facebook, facebook tips 1:40 PM
As we all know we are talking about world largest and most popular social network Facebook. Facebook is the most easy to use social network as far as i know but when we talk about its features and apps we must say that Facebook has lot of entertainment.Connecting with people, making new friends, keep in touch with old friends family cousins and others what what we use Facebook for.We daily spend hours and hours in Facebook. So, we must need to know about adding more friends. Always be careful about fake accounts. As no one wants to have fake friends in their list. So here we made a list of things that you can identify fake accounts easily. 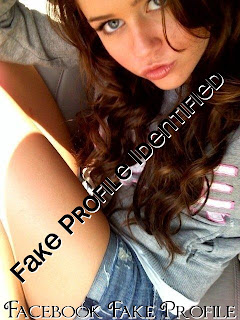 So, how do you identify Facebook fake accounts ?
1. Normally we can identify fake facebook account from its friendlist. If you see a user has mass number of friends such as 2000 or 3000 more friends that means that account might be fake. But most of the times fake accounts disable viewing its friendlist.
2. Profile photos albums photos. Watch the photos careful , a fake account always do not have more then 5 or 6 profile pictures. Also not more then 1 or 2 albums. As we all know we all have camera even in cellphones so it is easy to upload photos regularly. So always see photo activity and updates. Watch the photos does it update regularly or frequently and photo types.Also see the tag photos as fake accounts will have more tagged photos.
3. Walls and comments are most important part. As fake accounts will not be able to reply all wall posts and comments. Which means less activity. So if you see the account holder is less active in her or his comment and wall posts that means that account might be fake.
4. Lot of mutual friends. This is very common in all fake account that you will see in a fake account there is lot of mutual friends.
5. Always watch networks. A fake account will be in lot of networks joining in lot of networks that is not possible that a normal person can be everywhere. So network is also a common factor in all fake accounts that they will have lot of networks in their list.
Posted by Toukir Rahman