But Facebook still got 2.5 billion outstanding shares o market, and the company's value is to be $75 billion, as down from $80 million at the end of October, and in Septermber it was $82.25 billion and $82.5 billion in AUguest.

The auctions had plateaued earlier this year at $35 per share, before beginning a slow decline in late summer.

The SharesPost results seem to contradict other data: reports of doubling revenues for the social networking site, a successful F8 developer conference, growth in its lobbying and public affairs operation,  a very successful  partnership with Spotify, and enhanced privacy features.

All of these factors outside of the SharesPost pricing trends would point toward a possible initial public offering of stock sometime in 2012. But the last four auctions of Facebook stock seem to indicate that an IPO needs to wait. 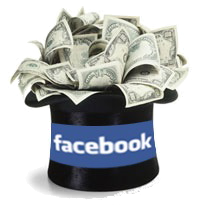 Then again, Facebook shares are still highly coveted. The demand is so strong that one Florida fund manager decided he couldn’t wait for a Facebook public offering and launched one of his own making.

John Mattera of Fort Lauderdale, was accused of promoting phony access to shares of Facebook and Groupon, according to a report in Reuters.

The U.S. government said that $4 million of the $11 million that was invested with Mattera went to such luxury items buying cars and jewelry, paying personal taxes and settling a private civil fraud lawsuit.

The criminal complaint filed in Manhattan district court yesterday charges Mattera with securities fraud and money laundering. He faces up to 20 years in jail if convicted.

The news of this charge came a day after the latest SharesPost auction and therefore didn’t influence the closing price in any way. Private market sales of Facebook stock occurs on a monthly basis, so it’s possible that investors might remember Mattera when bidding on the next round of shares.

Meanwhile, here’s what SharesPost sent out to members about the Facebook stock auction that closed on November 16:

SharesPost’s affiliated broker-dealer completed its auction of 75,000 shares of the Class B Common Stock of Facebook, Inc. on November 16th. A clearing price of $30.00 was established at the auction. Members submitting Qualifying Bids at or above the clearing price will be contacted shortly with instructions on next steps for completing this transaction.

SharesPost members who wish to be informed of and be eligible to participate in future auctions of private company securities must first be qualified by our affiliated broker-dealer as an accredited investor under the securities laws. To get qualified, please click on the green button below. We look forward to serving you at SharesPost in the future.
Posted by Toukir Rahman