0 apple 3:10 PM
Apple founder Steve Jobs died Wednesday. Facebook, Google, Microsoft, President and all the people of America paying tribute for him. As he was a great man and build up one of the largest Tech company which is Apple with his great Ideas and Inventions and the magical way of thinking. He always use to think different then others. He left collage in the early twenty life and started his own business and build up a empire of the largest Tech company Apple. Apple one of the popular and largest company in the world for laptops, TV, Cellphone, Mp3 Players and all other technology has been build and dreamed by the Late Steve Jobs. We all will miss him and pray for his soul rest in peace. 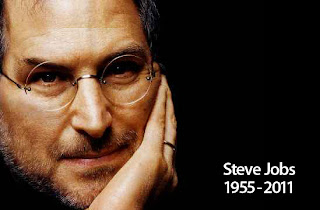 Here are some magical moments video of Steve Jobs: