0 apple, facebook 2:43 PM
Mark Zuckerberg Founder and CEO of World Largest Social Network Facebook has posted a message paying tribute to Late Apple Founder and CEO Steve Jobs. Mark Zuckerberg wrote in his Facebook profile “Steve, thank you for being a mentor and a friend. Thanks for showing that what you build can change the world. I will miss you.”
This post has been made at 8:30 P.M ET and over 85000 people liked it by ZUckerberg's more then 6 Million Facebook Subscribers.

Apple and Facebook have had a contentious relationship, it is hard not to draw comparisons between Jobs and Zuckerberg, both of whom drooped out college and founded their iconic companies in their early twenties.

Meanwhile, Facebook f8 conferences have become a platform for Zuckerberg to take center stage and share his company latest innovations, much in the way Jobs captured the eyeballs of tech watchers everywhere with his iconic keynotes.

This year , the two dined with President Obama and other tech luminaries, as you can see in the below photo released by the White House: 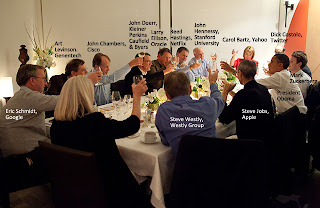