0 apple, iphone, iPhone 4S 2:05 PM
Iphone 4S features and  specifications: Iphone 4S is simply something we even didn't expected and beyond our imagination. The features are extra ordinary and you can't find it any other phone in the world. So, some of the few important updates are its processor, camera, new applications, video recording, OS, bluetooth, Battery, Power, Siri voice assistance, CDMA/GSM both and mor. See below for the upgrade list: 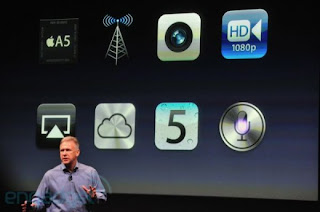