0 apple, iphone, iPhone 4S 1:58 PM
Apple has finally announced the new iphone 4S. "The Most Amazing iPhone Yet" so why does it will be better then iphone 4.
Iphone fans would be disappointed about the new iPhone as it is not like the mythical iPhone 5.

But iphone 4S is upgraded in technological innovation and sophistication that may surprise you and all the owners of iphone 4 as well. 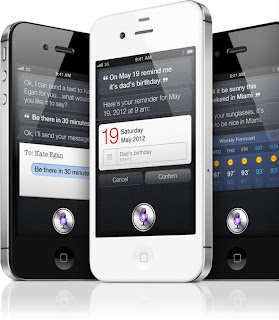 Some reason that why iphone 4G is worth the price of upgrading.

Iphone 4S Siri : Ask and you shall recieve:
Having a own personal assistant waiting for your beck-and-call sound ? A helping hand that can look up the weather, read your text messages, find your nearby resturants, tell you the time in India, set your alarm clock, give you direction, tell you timetable, check your calender for conflicting meeting, dictate and transcribe your notes and text messages, read a book for you and so on and all you have to do is just ask ?

That is call Siri the new iphone 4s personal assistant build in.

Just like you watch in the action movies that a person speak to his car or computer or robot and the device just work as they tell it to do. Siri personal assistant of iphone 4s is just like that but this time a cellphone where you can send your commands though speaking. You just have to speak normally like to tell Siri to set reminder, shedule, a meeting, send a message, set the alarm, tell the time of a location and more.You can also ask siri about the traffic conditions as well as the weather conditions. for example "Do i have to go out with umbrella" ? for instance and query your handy helper for any other right-here-right-now needs.

Siri understands what you say, the context and meaning around who and what you mention in your requests, and is capable of responding accordingly.

But Siri is only for Iphone 4S you will not get it in your Iphone 3G or 3GS. 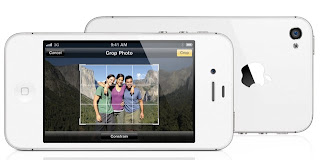 Iphone 4S new Camera Point-and-Shoots:
Iphone bona fide digital camera replacement. Iphone is the top camera on Flickr.
The new iphone 4S has a camera with 8 megapixel sensor, a new fifth lens, an enlarged aperture, Video image stabilization, Temporal noise reduction, face detection and reduced motion blur, meaning it legitimately rivals the specs of point-and-shoot cameras. The camera also now allows for basic photo editing, so users will able to edit, crop, rotate, auto enhance photos, remove re-eye and more.
Moreover this will be the camera that you always wanted to be in your iphone to take photos without any sacrifices.And as Apple said iPhone 4S camera will be the only camera they have ever used.

On the other hand Apple also upgraded the quality on the video camera as well. Now by using 4S you can shoot 1080p HD videos and they also have upgraded the front 3G camera for webcam and other activities. So, till now iPhone camera is more upgraded with more function and easy-to-use feature and quality. 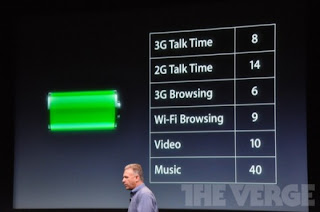 Iphone 4S has the same A5 Chip just like the dual-core chip in the ipad 2.
Which means iphone 4S has two processors will now split the duties of your phone's work load.Everything will load faster, everything will be faster with double speed, web pages will load twice as fast, applications will launch and run faster then before, data will be download twice as fast 14.4 MBps and graphics will render faster as well.

Faster doesn't mean you will have to compromise on battery life because iPhone 4S battery can handle up to eight hours of talk time 3G or 14 hours of 2G talk time and six hours of 3G browsing or nine hours of WiFi browsing. Apple has announced about the power and speed upgrade of the new iphone 4S.

Anywhere you Go Iphone 4S will be with you, World Phone:
So are you using CDMA or GSM network ? Who cares and who wants to wrorry about the network capability of their mobile device ? not me at least, and especially not those who travel abroad frequently. Iphone 4S users will not have to worry about which network they are using because it will supports both GSM and CDMA.

Why would that will matters? first , there is the business class of folks, an important market for apple, who need a device that works in whatever country they may be in this week. If you recall, Apple kicked off its "Lets Talk Iphone event by running off some impressive figures. Apple new CEO Tim Cook made it a point to mention that 93% of fortune 500 companies are testing and deploying iPhone's in the workplace. With CDMA and GSM support, the iPhone 4S can roam on GSM networks in 200 countries, making it ever more business-appropriate.

Also Apple a phone with CDMA GSM support simplifies its product line and will enable it to deploy on the new carriers. Like Sprint without a second thought.

Also of course it is classic Apple to add in technology that strips out confusion for its customers. You can stop worrying about your carrier network and which iPhone model you need. And just buy and use the iPhone.

So are you going to use iphone 4S ? share your comments ?
Posted by Toukir Rahman