0 google 2:53 PM
Google the largest search engine is paying tribute for the late Apple Founder and CEO Steve Jobs on its homepage. Under the company trademark search bar, a message simply reads : "Steve Jobs : 1955-2011" and links to Apple Homepage. 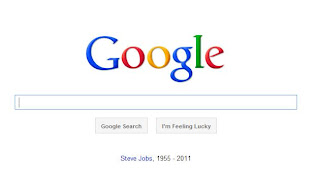 Apple has announced that Jobs had passed away on Wednesday, Jobs has already resigned from CEO of Apple Company in the last Auguest, and he wrote “I have always said if there ever came a day when I could no longer meet my duties and expectations as Apple’s CEO, I would be the first to let you know,” he wrote. “Unfortunately, that day has come.”
Posted by Toukir Rahman