Google Translate for android voice to speech , text to speech

1 Android, google 2:37 PM
Now a days most of the techno freak people use cellphones or tablet for information and communicate with each other.But there is still a problem which is language. So if everyone can understand everyone's language it will be so easy to communicate with each other.
Google has launched an update to Google translate for Android phones with an great experimental feature called Conversation Mode, which enable you to you translate speech back and forth between languages. First it started with English and Spanish, But now Google has finally launch another update with 14 more languages : Brazilian Portuguese, Czech, Dutch, French, German, Italian, Japanese, Korean, Mandarin Chinese, Polish, Russian and Turkish. 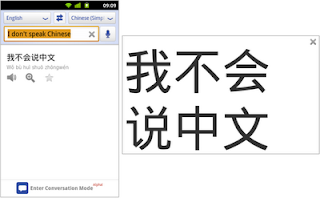 This technology is still in alpha, so factors like background noise and regional accents may affect accuracy, but since it depands on examples to learn, the quality will improve as people use it more and more. This early version out is to help tart the conversation no matter where ever you live in the world.
There are few more other features which make it more easier and comfort to speak and read as you translate. For example, if you wanted to say "where i am going now?" but google translate recognizes your speech as "where i am running?" now you can re-correct the text and edit the spelling mistake from your screen.You can also add unrecognized words that you know in your personal dictionary.
When viewing written translation results, you can tap and the magnifying glass icon to view the translated text in full screen mode so you can easily show it to someone else nearby you and you can read it more quickly without any trouble, or just pinch to zoom in for a close-up view.

Google has also increased the screen of the App so that it will be fit in the Android tablets.

You can download the Google tranlate app from here
Google translator is for Androind V 2.2.
Posted by Toukir Rahman