0 blackberry, facebook 8:36 AM
So are you addicted to facebook ? and you use blackberry phone ? Facebook messenger, the social network dedicated mobile app for member to member messaging texts and picture or location exchanges has been upgraded with lot of new features. As before the app was available for ipad, iphone and Android now also arrived on Blackberry as well. Now you can use the new Facebook messenger app on your favorite blackberry phones.
Facebook Messenger now shows app users on iPhone, Android and Blackberry which of their friends are online or available via mobile and makes it easier to send messenges to the folks they communicate with most frequently.This new messenger app update shows when a user of Facebook friends are typing, an experience that emulates BBM, iMessage and Facebook's own web messaging feature. 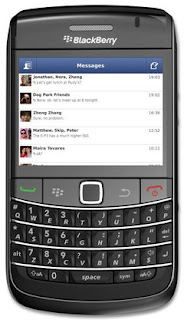 The Android Facebook Messenger app also now includes support for 22 additional languages, and the iPhone app has added 12 brand new language support as  well.
The app, based around group messaging app Beluga, a startup Facebook acquired earlier this year, prov ed to be an early hit with iPhone users with the update , the social network is demonstrating an ongoing commitment to real time communication across multiple platforms, and its app now better rivals Apple and BlackBerry single platform messaging systems.
The new Facebook Messenger Version is 1.5