0 facebook, Social Networking 4:35 AM
Mark Zuckerberg has announced the Facebook timeline last month in September.Everyone is very excited about when new profile layout will be online, which will give all the users their entire Facebook history on their profile page rather then the most recent updates that launch for all Facebook users. 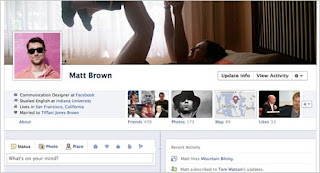 As we have seen many people have liked the new Timeline developers demo, but most of the people dislike and want the old Facebook to stay alive. Yes this is sure that users are so addicted to Facebook basic old layout that even they see a simple change don't like it. Yes i must say people are really addicted to facebook as they are using it each and every day since year.

So what would be the mysterious date of Facebook timeline that Facebook will officially launch for all the users - would it be October 1 i don't think as the date has already been past, or October 6, or October 13, i even it could be October 20 ? probably not.

Here is what seems to be happening that When users activate the Timeline feature from developers site, Facebook gives them a date when their personal profiles will publish. It does not necessarily refer to the date when all users will receive the feature, and varies from user to user.

Some observers have interpreted the multiple dates as evidence that Facebook has pushed back its public launch of Timelines, perhaps as a result of a trademark lawsuit that was filed by Timelines.com (nothing in the legal filing indicates that Facebook changed its Timeline launch date). It is more likely that the feature is intended to launch gradually rather than all at once. We haven’t discovered a launch date, because there is not just one.
Posted by Toukir Rahman