1 News And Information 9:18 PM
A child has founded inside a Green Market bag from garbase near dirt road in Dhaka Bangladesh.The doctors, nurses have given him treatment as well as mother's love.A rat or Dog has eaten his leg fingers.Even the mother who gave her birth didn't cut the umbilical cord.His body was covered by the umbilical cord and blood.This child is survived that is really amazing.The people who have taken the child to hospital and take care of the child and give love with treatment and help the child for a new life showed that there are still people who helps people.Media is always trying to show off all the bad news about the mistakes of medical and treatments by the doctors and nurses but when a doctors or nurse save the poor peoples, give money to them even give blood treat them very well take care of them nobody white about  in electric media or even in newspapers.Even some of the private medical's provide free treatment and medicine to the poor people. 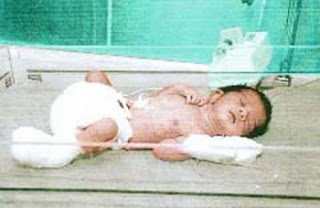 The child was found in central road Dhaka Bangladesh, some people saw this child inside a green market bag covered with blood.His head was inside the bag and legs outside of the bag.Even dogs and rats eated his feet fingers and it was bleeding.Alena Khan from Humanrights commission live near by.She was at home and saw that people were crowded near her house.She came out and saw the child and very quickly took him cover him with towel and take him to Laib Aid hospital.After Dr. A Am Shamim heard about the child he took all the responsibility for all the expenses for the child's treatment and he told a doctor's team to take care of the child.Child Specialist DR. Nowshauddin Nobi, DR. Kazi Kamrul and Orthopedic Surgen DR.Zia Uddin was giving treatment to the child.Later on a plastic surgen has been added as well. After 40 days of treatment the child again have his feet fingers.Now the child is completely fine.Nurses doctors has taken care of the child 24/7 with love and careness.Around 4 lacs Taka or $6000 has been spended for the child's treatment and has been given by the authority of Laib Aid Hospital Dhaka.The doctors and people named the child Tamjid.