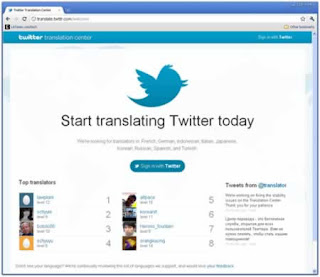 I guess we all are familiar with the lagest micro blogging social network twitter. Twitter has added five new languages for its users. Now will able to see twitter in Chinese, Hindi, Tagalog and Malay. The translation will be available for the new five languages. That brings twitter a total number of 17 languages.As all other online service like google , facebook and others twitter also relying on volunteers for translation. If you would like to join in , you can simply go to the Twitter's translation center.

Twitter also said that soon they will add fix more new languages for its users to the translation Center. The following languages will be : Swedish, Norwegain, Danish, Finnish, Polish and also Hungarian.
Posted by Toukir Rahman