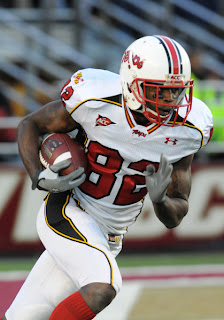 
Making his first start, rookie Ravens WR Torrey Smith exploded in Sunday's win over the Rams, catching five passes for 152 yards and a trio of touchdowns.
It was an electrifying effort from the second-round pick, who blew by Rams CB Justin King for a 74-yard touchdown on the Ravens' second play from scrimmage. He capped Baltimore's third series by getting behind the Rams' entire secondary and hauling in a 41-yard touchdown at the back of the end zone. For his third catch — and score — of the first quarter he went skyward, corralling an 18-yard fade to give Baltimore a 21-0 lead. Slowed by cramps, he was mostly silent for the rest of the afternoon, but the damage was already done in what end up a 37-7 Ravens victory. It's just one game, but Smith certainly appears to be the lethal vertical threat the Ravens drafted him to be. He's worth an immediate add in all formats.
Posted by Toukir Rahman