“So press the Left trigger for a melee take down.” Drew Holmes, writer for Saints Row: The Third, said. We went ahead and innocently followed his instruction. Our character whipped around and kicked the nearest pedestrian, who just so happened to be some sort of balloon chested stripper nurse in a g-string. After knocking her to the ground, our character jumped on top of her and started whailing away, initiating a QTE. Befuddled, we obeyed the onscreen prompts mashing LT and RT as if we were Kratos and she was Zeus. “Okay, now press LT while running and you’ll do a running takedown.” Our character leapt forward and grabbed another pedestrian’s head from behind, leaping and slamming it into the concrete before flashing a smile and a reclining pose for the camera. And we haven’t even gotten to the two-handed purple dildo yet. 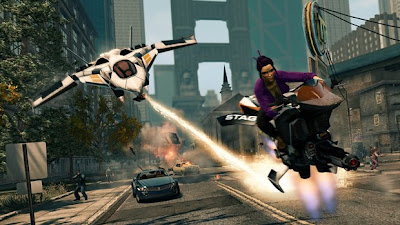 The more even keeled among you might be thinking, “Wow that’s pretty reprehensible behavior.” And while you’d be right, SR3 takes great care to present all of its absurdity in the most Tom and Jerry way possible. To say SR3 “Follows in its predecessor's footsteps” would be a gross understatement, as it’s jumped so far off the deep end that it makes SR2 look positively urbane. The only people who can take this level of cartoon violence seriously are elected officials intent on using it as an un-ironic example of how games are corrupting the kids. 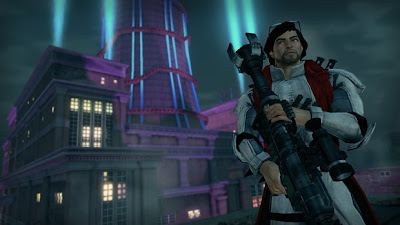 The demo continued, with Drew showing us the game’s dedicated nutshot button that gives you a different crotch crushing melee attack depending on which weapon you have equipped. Everyone in the room cringed as our maniac went to town on a police officer’s testicles with the butt of his rifle. I could mention the standard pistol/shotgun/submachine gun options, but we’ll focus on Professor Genki's Mollusk launcher instead.
A Hello Kitty nightmare of bright pink and green, it’s a rocket launcher that shoots out tiny squids that can be remotely exploded, or if you tag an enemy with one, turn them into walking zombies that fight for you. While equipped, it constantly giggles and talks to you in a pseudo anime voice. We then gave some even more powerful weapons a shot, including a Hammer of Dawn like airstrike weapon that devestated a group of gang members, and a remote control drone strike that feels just like a Modern Warfare level. Oh, let's not forget our melee weapon, an undulating 4 foot long two handed dildo. 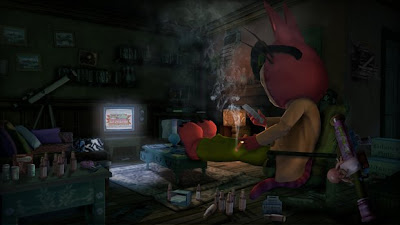 Saints Row's side missions, or activites, have always been entertaining, and we were excited to see some of our favorites return. The destruction focused Mayhem mode returns, encouraging you to do as much monetary damage as possible by blowing up everyone/thing in your path. FYI, a human life is apparently worth $103. The always entertaining Insurance Fraud mode also returns, a bizzaro version of Burnout's Crash mode, as you hurl yourself into vehicles and attempt to bounce your ragdolling body into the paths of other vehicles, racking up as much bodily damage as possible.
One of the new activities, entitled Professor Genki’s Super Ethcial Reality Climax is a sort of “Japanese game show meets Running Man” according to Drew. We ran from room to room, shooting guys dressed in ridiculous fish and gorrilla costumes, trying to keep our combo score alive by getting consecutive kills and shooting cardboard cutouts that popped up. Hitting the targets awarded cash, points and caused anime styled alerts like “ETHICAL” to pop up on screen. 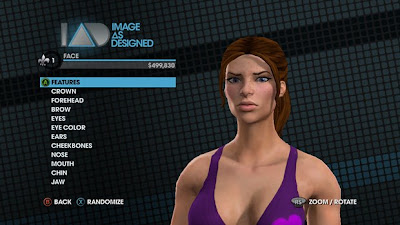 The Saints series has always been the king of customization, especially since GTAIV abandoned a lot of the options from San Andreas, but Volition has gone above and beyond the call of duty with The Third. As before, characters can be fully customized; clothes and facial hair are gender neutral, and you're now allowed to pick any skin color you like. And we do mean any color. Our brief stint in the create a character mode resulted in an obese, metallic blue lady, with an F cup chest, cornrows and a pantsuit. A “Sex Appeal” slider lets you adjust your character’s bust/package size appropriately. As in previous games, your monstrous creation will appear in every cutscene as is, talking in whatever inappropriate accent you've given them.
While you might dismiss all this insanity as a flimsy veneer to mask weak gameplay, Saints Row: The Third is extremely adept at streamlining the fun stuff, and cutting out the boring bits. Stealing a car should be fun, but after watching the same canned 15 second hi-jacking animation for the millionth time, it gets old. Cue the running carjack, where your character leaps through the windshield and boots out the occupant almost instantly. Instead of forcing you to take cover and potshots at enemies, SR3 treats cronies as such and let's you cut them down like corn. They're only powerful in large groups, which makes encounters much faster, and much more fun. The new GPS HUD also puts large directional prompts on screen, letting you focus on the road instead of squinting at a mini-map. 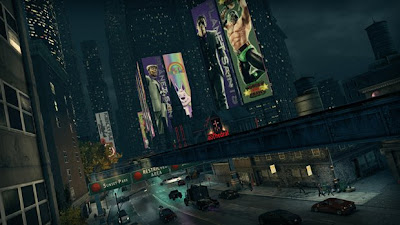 If GTAIV was the good girl, the valedictorian you were proud to take home to mom, Saints Row 2 was the party girl you got plastered and smashed car windows with. Where GTAIV got a little caught up in making its own world believable at the expense of fun, Saints Row: The Third isn't attempting to win gravitas with the critics; its one and only goal is making a fun game that you can pick up and play. If you're easily offended, there's nothing we can say to change your mind, but underneath all the zaniness is one of the most immediately fun sandbox games we've played in a long time.

Here is the video trailer