Netflix Now Enforcing Limit of One Movie Stream at a Time 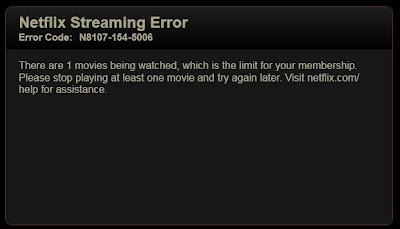 Netflix has started to restrict its users from streaming more than one movie at a time as part of its price hike. The change could have a major effect on how families use Netflix. No longer can one person watch a movie from the iPad while the rest of the family watches another film on the Xbox, for example.
As website Stop the Cap points out, Netflix has always had a policy that limited streaming, with those on a single DVD or streaming-only plan limited to streaming one film at a time.
But it appears as if Netflix just started enforcing this rule on Sept. 1. The changes seem to coincide with Netflix’s price hike, which took effect on Sept. 1 as well. Now, if you attempt to launch two movie streams, Netflix will block it and tell you that your membership plan doesn’t support multiple movie streams.
We received the error message in our tests, confirming other reports. However, we also learned that television shows seem to be exempt from the movie streaming rules. For example, we were able to stream a movie and a TV show simultaneously, but unable to stream two movies at the same time.
The move is sure to upset some customers as Netflix continues to deal with a number of setbacks. Its talks with Starz recently broke down and customers are not happy with the recent price hikes. Netflix’s revenues are at record highs, but without Starz, it loses some of its best content. It’s unclear how customers will react to this latest change.
Posted by Toukir Rahman