0 firefox, firefox 7, moziila 10:53 AM
Mozilla has recently launched the new Firefox 7 version. As mozilla is releasing browser updates very fast with in few weeks. After he had the release of mozilla firefox 6 with in 6 weeks mozilla release the new mozilla firefox 7 version. So, What is the story behind it ? mozilla firefox 6 has lot of bugs as well it used to take too much computer process as it was said to be 20% faster then the older version of mozilla but it wasn't. So, mozilla released the new mozilla firefox version 7 with all fixes that occurs with the version 6.Mozilla patched 11 vulnerabilities in the desktop edition of Firefox as it upgraded the browser to version 7. 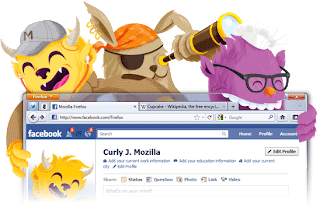 So what improvements do we have in version 7:
1.Reduce in memory by 50% percent.
2.Implementation of WebGL, a 3-D rendering standard that both Firefox and Google's Chrome comply with.
3.Quicker rendering of HTML5 Canvas-based animation.
4.New look.
6.Speed up browsing speed.
7. Faster synchronization of passwords and bookmarks between copies of the browser and more

Mozilla now bundles virtually security patches almost exclusively with each version upgrade, users stuck on Firefox 6 or earlier must update to quash the bugs.Firefox 8, next in the series, will sport some additional memory bug fixes, said Nethercote Tuesday, including one that decreases consumption on very large web pages.Mozilla said Thursday that it will launch Firefox 8 to the "Aurora" channel some time today. That edition is slated to ship in final form on Nov. 8.

Five months ago, Mozilla shifted to a faster release cadence and a multiple-version program that offers Aurora, beta and release editions -- listed in increasing order of polish and stability -- for testing and evaluation.

As for now you can download the new Mozilla firefox 7 and use it until the next release of mozilla firefox 8. We always recommend you to upgrade your browser for security and performance and bugs fixes.