0 Cellphone news 6:52 PM
Boost Mobile expanded its messaging phone offering this year with the Motorola Clutch +i475 along with the Motorola Theory. The Theory is very similar to the Clutch +i475 except that it does not have push-to-talk capabilities. However, it does have a slightly better 1.3-megapixel camera (The Clutch only has a VGA camera). The Theory works as a decent messaging phone, especially with its tactile QWERTY keyboard. However, don't expect much more than that with this basic handset.

Design
The Motorola Theory has a very similar design to the Clutch +i475. At 4.4 inches tall by 2.4 inches wide by 0.5 inch thick, it's not that much bigger either. It has the same slate form factor, with rounded corners and a soft-touch finish on the back. The front trim of the Theory is clad in a glossy dark gray that adds to the phone's utilitarian look. Yet, the Theory does have a certain appeal thanks to its svelte and compact shell. 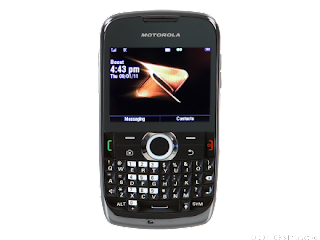 The Theory's 2.4-inch display won't wow anyone, but it is a little better than other basic phones in Boost's lineup. The QVGA 320x240-pixel resolution is certainly sharper than the 220x176-pixel resolution on the Clutch +i475, and the 262,000-color support is welcome as well. Yet, graphics still looked sadly lackluster, with a dated interface and blocky text. Still, this is fairly common with phones in this category. You can adjust the backlight time, the brightness level, the wallpaper, the clock format, the banner text, and the menu font size.
Underneath the display is a simple navigation array that consists of two soft keys, a dedicated camera key, a back key, and a round toggle with a center select key in the middle. The Send and End/Power keys are on either side of the array. The toggle can be mapped to four user-defined shortcuts. We liked that the toggle is large and raised above the surface for easier navigation, but the rest of the keys felt a little too flat for our tastes.
The Theory redeemed itself with its QWERTY keyboard, however. The keyboard is admittedly quite cramped, but the raised keys helped to alleviate that problem. They're slightly reminiscent of the BlackBerry Curve's keys with their bubblelike texture that makes texting quick and easy. The number keys are highlighted in white, and the space bar is quite spacious. The keyboard also has a dedicated speakerphone key.
On the left is a Micro-USB port and a small 2.5mm headset jack, while the volume rocker sits on the right. The camera lens is on the back.

Features
The Theory has a 1,000-entry phone book with room in each entry for five numbers, an e-mail address, an instant-messenger handle, a Web URL, a street address, and notes. If you like, you can organize your contacts into groups and customize them with photos for caller ID or any of 16 polyphonic ringtones or message alert tones. Unlike some other Boost Mobile handsets, however, the Theory does not have push-to-talk.

There aren't many multimedia options with the Theory, but it does have a 1.3-megapixel camera lens. It can take pictures in four resolutions with settings for the self-timer, picture frames, brightness, white balance, color effects, up to 4x zoom, and four shutter tones with a silent option. Photo quality was not good. Images were tiny, blurry, and dark, especially in low light. Even when there was enough light, colors looked muddy. You're limited to 148MB internal memory.
Performance
We tested the Motorola Theory in San Francisco using Boost Mobile's network, which is essentially Sprint's. Call quality was quite good for the most part. We heard our callers clearly without any distortion or background noise. Their voice quality was impressive as well.
On their end, callers reported similarly good quality. However, they did say our voice sounded a touch muddier as usual. Otherwise, they said we sounded loud and clear without any static or hiss. Speakerphone quality was quite good too, though callers detected a heavier echo effect.

The Motorola Theory has a rated battery life of 5 hours talk time and 20 days standby time. According to the FCC, it has a digital SAR of 1.21 watts per kilogram.
Conclusion
The Motorola Theory is just what it is: a basic messaging phone. We weren't fans of its display and camera, but we did like its simple and compact form factor as well as the QWERTY keyboard. It doesn't have push-to-talk, which might be a bummer for Boost customers, but it's otherwise a solid messaging phone without a lot of frills. It's $79.99 without a contract from Boost Mobile.