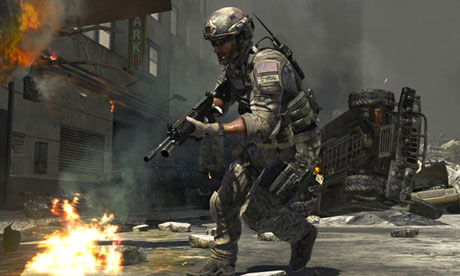 Mark Rubin has been at Infinity Ward since Call of Duty 2. He's seen the series grow from a relatively successful WWII shooter to a global phenomenon. It's not been an easy journey – last year, the studio's co-founders Jason West and Vince Zampella departed amid accusations of insubordination, and a court case between the duo and Activision is looming. In the aftermath of the dismissal, half of Infinity Ward's staff left, many joining their old bosses at the newly founded Respawn Entertainment.
"It was actually an extremely tough time for all of us, as I'm sure you can imagine," said Rubin at a MW3 press conference last week. When asked how he'd got through it, he simply joked, "alcohol".
Last week, we spoke to Mark about the development of Modern Warfare 3 and the philosophy behind the series. Here's his personal experience of the game so far. 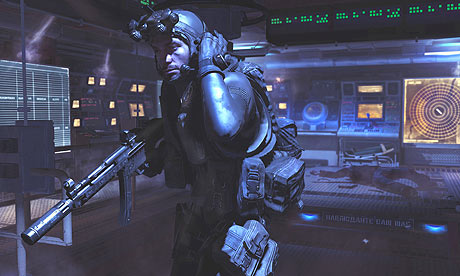 What's it like to be part of such a phenomenon?
It's really bizarre! (Laughs) Every time I think about it, I'm not sure I actually get to a conclusion. When Call of Duty 2 came out it was a really successful game, but its success was in the vicinity of other games. But then CoD 4 was released and it was so huge. I think what happened was, it arrived at that point at which gaming became a more culturally acceptable thing. We had celebrities going on chat shows, talking about how much they played; suddenly everyone was talking about games. It started this snowball. It socialised gaming, suddenly it wasn't just the thing that guys do in their mum and dad's basement! But there were still games in the vicinity of CoD – Grand Theft Auto, for example.
Then Modern Warfare 2 comes out and suddenly we're in the 28-29 million area – there's nothing else there. And it's breaking entertainment records across the board. From a personal perspective… the hard part is managing the stress of that success. That may sound strange, but the more popular it has become the more stressed we are as developers at having to make this game. We're not reaping the benefits from it as much as some people think we are!
The idea of 30 million people playing – does that feed into development?
Definitely, and Modern Warfare 3 is sort of a big learning step for us. We realised we needed to address that larger community more. With 30 million people all communicating, that's a lot of voices, a lot of feedback – and a lot of the time it's contradictory; yes to quick scoping, no to quick scoping, yes to this perk, no to this perk. We're inundated. So early on with this game, we developed a better method of listening to the community – it's just about translating that cacophony of voices better. There's more to go, but we've made a big step forward.
What have you learned from that process?
One important thing is the variety of players we have and the variety of play styles. That's why in MW3 we have the three strike packages – each plays differently and lends itself to a different style. Our previous killstreak system was based solely around killing, but with this game's pointstreak system, it's not just kills that move you up – if I capture the flag, or a domination point or I take a headquarters, I'm getting points for that, I am being rewarded for my play style. There's more than that, there are a lot of things in the game that have been subtly added to support different play styles. We also added weapon proficiencies, which allow players to take the weapon they like and customise it more – not just putting camo skins on, it's about customising the feel of the weapon; so less kick, less sway, less flinch… you can really adjust the way the weapon feels and make it fit your style.
Let's talk about technology. Critics of Modern Warfare will often point out that the games are based on the Quake 3 engine, which is several years old…
There's nothing left in the engine from Quake any more. We've continued to re-write every section. We do a lot of re-writing the tools, re-writing lighting calculations. It doesn't sound very interesting. It's very iterative.
Some gamers ask why you've never introduced vehicles into the multiplayer…
In order to put vehicles in you have to expand the maps significantly and all of a sudden it becomes a very different kind of game. It's not our game any more, it's something else. We make a very specific game – the maps are small, you get into the action quick, there isn't a whole bunch of running from the spawn for five minutes to find an enemy. To us, it's almost like saying, well, why don't you have jumping platform puzzles? It's not our sort of game.
What is your sort of game?
Our philosophy in game design is all about fun. We don't make tech demos, we don't look for the latest buzzword graphics elements, like… I don't know… fullscreen ambient occlusion. We're not like, we have to put that on the box – we don't think that way. There are games I play that are graphically beautiful and that's why I play them, but there are games like ours that are just fun. That's what we concentrate on. Everything is geared around making the game more fun.

So what have you added to the engine for Modern Warfare 3?
It's all back-end technical stuff.
Like?
There are a number of things. Look, our coders sit around and wait for our designers to tell them what to do. Coders aren't sitting there going, 'we're going to do this cool effect'. Security was a big problem in previous games, so we've done a whole lot on that to create what we hope is a much more secure game. Part of that is learning from Treyarch's work on Black Ops and being pro-active and aggressive on banning, watching the leader boards, looking for cheaters.
And one of the big things we've changed is the ability to alter the game post-launch. That doesn't sound like a cool feature, it sounds simple – it's like 'why can't you just release patches?' Well, games don't work that way – you can patch some things, but for others, it's a significant deal, patching is not broad enough to do everything in the game.
So one behind-the-scenes feature allows us to update files, sometimes without even doing a full patch – we can just tweak things like weapon balance, which we could never do before. In the past, we'd put out a game and realise, 'hmm, that's weapon's really over-powered' but there was nothing we could do about it. I mean, with twenty million people playing the game, you learn more in the ten minutes after release than you do in months of pre-launch playtesting. So that tech feature was a big thing for us.

And also for single-player, our engine is very performance orientated – it's all about keeping 60 frames-per-second, it's all about fluidity, the feel of the game; we want you to forget you're even holding a controller, that's the key goal. So then design came to us and said, we want to stop doing these little villages in Russia or the Middle East, we want to go big, we want to go to the places that people live in, we want it on the streets that people walk down when they go to work. But it's not as simple as just 'oh yeah, go build London'. There was a lot of engine re-writing in order to make a big city work in our environment, in our technology, and still work at 60FPS

And it changes the atmosphere of the game doesn't it? Having all these highly recognisable European cities…
That's what we were hoping for. Call of Duty is not just big in America. Over half our audience is outside of the US. It's a global game and that's how we treated it, especially in the campaign mode. So you're not just in New York, you're in London, Paris, Berlin, Prague. And you'll recognise them; that corner of Westminster in the game, everyone knows it. Bringing the gameplay to right outside your door was the goal.
Is there a greater sense of responsibility? Some terrible atrocities have happened in these cities.
The Call of Duty world has always been fictional, it's not the world we live in – the history is different. The history of New York, of 9/11, it's not the same in our game. This is the US versus Russia, so it's almost like the Cold War from the Eighties, but in the modern environment, with modern weapons. It's more of a "what if…" scenario than a reflection of our world today. We're not trying to make a statement, the game is not socially conscious, we're not promoting any political direction. We're making stories. And, you know, it's quite simple. These are 'guys in wars' stories, they're like the WWII films we've all watched, the space war films we've all watched… the human spirit wins. That's what it is. The press does tend to point at the games industry, but well, fifty years ago it was rock-'n-roll, before that there were book burnings. There's always someone to point at.
Posted by Toukir Rahman