0 apple, ipad, iPad 2, ipad 3, ipad news 11:45 AM
In USA the largest cable and internet service provider Comcast is developing a television streaming system for Ipad users, just like the Cablevision and Time Warner. As the product was announced early this year, but yet no details have been posted yet.

This new TV streaming product is called AnyPlay, This will allow Comcast users to view live television on their ipad if they are connected with their home network, but to use this feature users need to have a special Motorola Television cable TV-to-IPTV box that, apparently, takes the live cable stream and sends it directly to the Xfinity TV iPad app over a local wireless network. But this service will not work over Wi-Fi from any other locations or even using 3G. 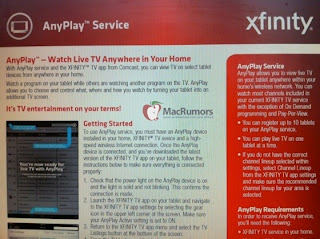 There are other solution like Time Warner, stream live video using internet connection.But Comcast AnyPlay appears to be a cable box that will sends video to the iPad rather than to a television. Users will able to watch all channels included with their Xfinity TV service. Also on the other hand users are allowed to register up to 10 tablets, but they will only be able to watch TV on one tablet at the same time.

Still there are not news have announced about the release dates or availability, but the device will be available in limited markets at the first time, and spreading to all Comcast customers eventually.
Posted by Toukir Rahman