As for now due to it is Google Wallet has just started it only works with Citi mastercards and also with the Google Prepaid Card. According to the official news Visa Card Company and Google has announced a worldwide agreement to support the visa PayWave application.

So , Lets talk about types of mobile Payments :

You can pay your taxi cab or at walgreens, you just need to tap or wave your phone to make the payments. The option tap and pay payment is really easy, but as the Google Wallet feature that has the most potential is what Google is call it SingleTap. It means users will able to combine their coupons , loyalty cards and payment methods all with one tap.

The result of SingleTap payment using Marcy's POS terminals it was really impressive. Using the google offers apps that can save coupons directly to Google Wallet for Android, you can make payments using your default payment type, just apply the coupon that you have saved and also apply the purchase to your loyalty card for that store.

Use Of The Google Wallet : 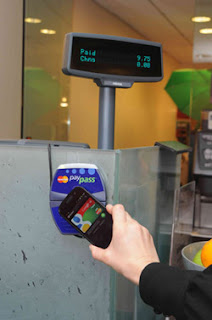 If you have never used NFC-enabled devices , it will take some times to getting used to. The Google wallet will only works if the screen is on and unlocked. If you do not use the Wallet with in a certain period of time, you will also be promted to enter an unlock code before using the app.Google has created its own Secure Element that adds an extra layer of security. Google hopes to make this secure element an accepted standard within the NFC space.

A question will be arise to many users of the Google wallet that "Does google know what i am buying" for now the answer will be NO. Google is not recording any local transactions on your phone, but the transactions are only identified by amount and location and will be only viewable by yourself.For example : if i want to look at my Google Wallet history, i will only see the date, location, amount. But Google as said that in future they will add more robust digital receipt system.

The security is really good as no one want purchases being tracked. But as if you look at the disadvantage , at least right now, of the Google Wallet is that receipts are still printed. But i guess when people will able to access to all the receipts within the Google Wallet app, then the system will be more useful for everyone.

But currently the biggest opportunity that we can see, is for Google offers. Google Offers as an app is a nice way to browse for deals, specials and coupons. You can just clip the offers to Google Wallet and then show the coupons at merchants, whether they are NFC-enabled or not it really doesn't matter.

The deail discovery space, the most important addition geo-location , is something i have been waiting to see take off for nearly tow years. Google is being very cautious to make its experience as low-friction as possible. However , with the right tweaking and perhaps with greater social integration. Google Places and Google+, this component could really separate Google from the pack.

As it is only the first step of Google wallet : American Express , Discover And visa have announce that all licensed their NFC technologies to Google, the next step is that to get the thousands of financial institutions and merchants on-board with an NFC system.

The NFC space is highly competitive. Visa has its own mobile wallet initiatives. As does American Express and Paypal.We are in the interesting place in the market , we are in the point where lots of activity is happening in this space and mainstream adoption seems closer than ever, yer these competing solutions complicate short-term adoption.

Google's approach is to create a great platform that it wants everyone else to build on. That is the general message the company has presented to everyone in regard to Google Wallet. It wants things like the Secure Element and the way it is being used by point-of-sale systems.

Interestingly, this is a similar game that competitors are taking too. Visa, for example, is licensing its technology to Google while developing its own platform.Visa company goal was to be wherever consumers want to make payments. That’s a vision shared by many of the major players in the payments space.

Google Wallet’s challenge will be to differentiate itself in a burgeoning market. This is just the beginning of what is sure to be a major technology story within the next 18 months.

So lets share your opinion about what do you think of NFC, Google wallet and the future payments and methods.