0 google, News And Information 6:01 PM
Last Saturday was 75TH birthday of Jim Henson, the puppet pioneer and beloved conductor of many a fuzzy childhood friend, from Big Bird to the Cookie Monster. To show him honor, Google as set the Google doodle or logo in its home page. The logo designed by Google and the Jim Henson Company. 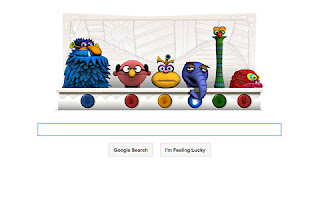 You can check out this video from those two companies describing their collaboration on the doodle, as well as the prolific puppeteer's creative process.


Mr. Henson was one of the driving creative forces behind two of television most iconic children programs. The first,Sesame Street plodded into living rooms in 1969 with characters like Count von Count and Oscar the Grouch in tow. Then, in 1976, The Muppet Show premiered, starring Miss Piggy and the great, green Kermit the frog.

Mr. Henson, who also had a hand in several films, died in 1990 at the age of 53, but his legacy and fan base persists. The Museum of the Moving Image is featuring an exhibition celebrating his work until mid-January, and the latest of many Muppet movies, this one starring Amy Adams, is scheduled to open later this year. Sesame Street is still on the air.

On the Google Doodle, you can use a mouse and keyboard to make the six characters open their mouths, glance furtively around, and even get in a bit of trouble. The little red guy on the end can be prodded into devouring his neighbor, the thin green fellow who looks like a pillar wearing a sock. But fear not! This show, too, is safe for children: Once the confrontation is over, the tall green puppet will poke his head up from the bottom of the screen and climb back into position, holding down the Google’s “L.”

If you have a little extra time, you can also make the puppets sing. Here is a video posted on YouTube by a fan, in which the Google Doodle sings “Boom Boom Pow” by the Black Eyed Peas.