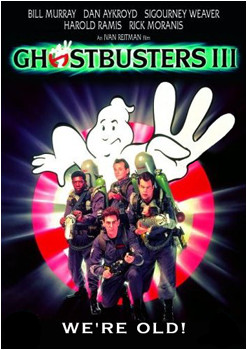 Synopsis: The film will bring back together the original cast of Harold Ramis, Bill Murray, Dan Aykroyd and Ernie Hudson in a mentor capacity for a new team of Ghostbusters.
Additional Notes: Harold Ramis, Bill Murray, Dan Aykroyd and Ernie Hudson to possibly star.
First off, let’s confirm that Ghostbusters 3 is indeed in development and has actually been making great progress these few weeks.
“Office” writers Lee Eisenberg and Gene Stupnitsky are curently penning the screenplay for this third installment, bringing back most of the original cast members back as mentors to a rookie group of Ghostbusters.  While Harold Ramis aka Egon Spengler has insisted for all the main players from the original films to make a return, Sigourney Weaver is still hesitant.
Dan Aykroyd aka Ray Stanz has released a few details on the film:


There will be a whole new generation that has to be trained, and that whole new generation will be led by an individual who you’ll all love when you meet him but I’m not going to tell you anything yet.  They’ll be lots of cadets, boys and girls, who’ll be learning how to use the psychotron, the accelerators and all the new stuff, the neuron splitter, which is going to be the interplaner, interceptor and all these great tools that they’re going to have, to flip from dimension to dimension.

Could this new team of Ghostbusters be larger than what we initially expected?  A Ghostbuster university perhaps?  Whether this movie blows people away or just completely tanks, it’ll sure look damn good seeing the original team back together again.