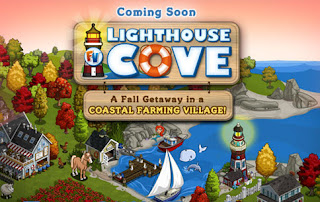 Firmville one of the top Facebook social game by Zyngda has added a new update called LightHouse Voce a new expansion its flagship.

Area's which wake due to the massive storm the Lighthouse Cove has been added for that.Users can add a gateaway that includes new crops, buildings, and a bed and breakfast and users will able to create culinary dishes.There have been added some new features in Farmville game which are River otters raspberry wine, super maple trees, darrow blackberries and duroc pigs. Only users with level 15 will able to access these new additions.

Nate Etter, GM of farmville has said that "Its the next milestone in the evolution of FarmVille. Its an extension of the core farming game."

Some more different types of dynamics to Lighthouse Cove has been added by Zynga, it was based on past launch of FarmVille's. In Match when FarmVille has rolled out English Countryside, it learned that some users would complete the entire expansion in marathon sessions, limiting the impact of the game. Now the game will be harder for the players to play with their friends. Because all the players will be in different points in the storyline.

There are six goals in this new series, and they're limited edition, being available for the next seven days (or just a week)

Come Ashore!
You'll need to earn the Piles of Hay by asking your friends to send them to you. As for the Chandler Blueberries, they take eight hours to grow, so even though you're not required to grow very many, that doesn't necessarily mean you'll be done with this one quickly. As for the Lighthouse Cove, you can repair it by collecting Logs, Stones and Steel Beams. For finishing this first goal, you'll receive 100 XP, the Restaurant, a Red Tractor and 2,500 coins. Hopefully you haven't already purchased a Restaurant for your new farm, as this will of course be worthless.

A Beach to Walk on
Hopefully, if you are one of those users that placed the Restaurant before receiving these goals, it will automatically detect that it's present on your farm and complete this task for you. As for the Supply Boxes - you guessed it - just have your friends send you some. Darrow Blueberries, meanwhile, take just four hours to grow. Finish this goal and you'll receive 200 XP, a Sailor Cow (a cow in an adorable little sailor's hat and "tie"), a Yellow Seeder and 2,500 coins.

A Quick Tour
The Creamed Corn recipe is made inside the Restaurant, and it requires three Butter & Sugar Corn, three Tarragon and one Pepper Bushels. The Butter & Sugar Corn and Tarragon crops are new to the Lighthouse Cove farm, while you might already have some Pepper bushels on hand from your other farms. As for the Wildlife Habitat, you're given the frame of one for free when landing in the cove, and can then complete it by gathering Fence Posts, Shrubs and Grazing Grasses.Once you finish this third goal, you'll receive 300 XP, a White Cedar Tree, a Blue Harvester and 2,500 coins.

After finishing these first three goals, you will have walked away with a complete farm vehicle set (save for the Combine) that will allow you to complete all of the farming tasks required on your new farm. Of course, you can always purchase a Combine Chassis from the store for that three-in-one farming convenience, but at least you'll have these vehicles to rely on while you're waiting for the Vehicle Parts to pour in. 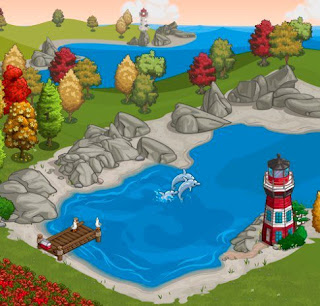 Anyway , To fix it, Zynga is staggering story releases in Lighthouse Voce, Users will not be able to complete the expansion in one feel swoop. Instead, new storyline events will occur every week, giving players a chance to experience the story with their friends until its completion later this year 2011.

The Zynga has been trying to release more games in few months as it debates whether it will delay its IPO. This September Zynga has launched Adventure World, a hybird adventure social game. And last August, Zynga has released unveiled Pionner Trail, an expansion to FrontierVille.

Now lets wait for the next Zynga releases and FarmVille Updates.
Posted by Toukir Rahman