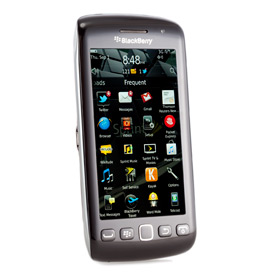 The BlackBerry Torch 9850 for Sprint ($149.99 with contract) promises a little more than it delivers. Its big touch screen, at least compared to the similar BlackBerry Bold 9930, implies terrific media, gaming and Web browsing. But the BlackBerry 7 OS just isn't up to the task, leaving us recommending the 9930 as a better BlackBerry, and Sprint's Android phones as better full-touch-screen smartphones.

Physical Details and Call QualityThe Sprint BlackBerry 9850 looks exactly like U.S. Cellular's model, so excuse me if I crib from that review here. RIM has done a relentlessly classy job with this phone. The phone is black and silver, and fits very easily in the hand at 4.7 by 2.4 by .45 inches and 4.76 oz. The back plate is a beautiful, cool matte metal. On the front, the four action buttons and trackpad are—delightfully—all physical rather than touch buttons, so you never have to worry about knowing when you've clicked them. Overall this feels like one of the most solid, durable phones I've tested in a while.

Press a button, and the bright-enough 3.7-inch, 800-by-480 screen comes on. The touchscreen is made of a warm, slightly convex plastic which is durable, but feels slicker and greasier than the touchscreens on many other competing smartphones.
With no physical keyboard, the 9850 lives and dies on its touch keyboard. The portrait-style touch keyboard is better than it looks at first glance, because first glance is dire: very tiny, cramped keys that look like a minefield of mistyping. And if you're typing email address or URLs, that's what they are. It's very frustrating.
But here's the secret: behind the typo-ridden keyboard is a truly great correction engine. If you're typing anything in English (including names in your address book), just blunder ahead; it'll be fixed on the fly and your words will look pristine. I was impressed at what happened when I trusted the machine, just as with the original BlackBerry Pearl.
There's a landscape-style keyboard, too, available if you turn the phone sideways. That one's much easier to type on. It's fine for emails, but in the Web browser, it takes up too much of the screen to be useful.
Still, I was missing the BlackBerry Bold 9930's physical keyboard—or the better touch keyboards on HTC and Apple phones—at the end of my testing cycle.

Voice quality was fine. I heard distortion at maximum volume, and voices were a bit muddy at lower volumes. The speakerphone, on the other hand, was excellent, and quite loud. Transmissions had more garble and background noise than I would prefer.
Talk time, at 5 hours 50 minutes, was very good (and longer than the U.S. Cellular version because the Sprint phone was getting consistently better signal at our test site), but that understates the 9850's battery life. This being a BlackBerry, it has considerably better standby time than other top smartphones—up to a few days of regular use.
Bluetooth support and voice dialing are excellent here, just like on other recent BlackBerries. The phone pairs easily and routes all sound over Bluetooth, both mono and stereo. This is how Bluetooth should work. The GPS locked in quickly and accurately, as well.
When every Sprint commercial touts 4G, it's tough to recommend a high-end 3G smartphone. RIM would argue, correctly, that Sprint's WiMAX is a battery killer—but users should have the choice to turn on WiMAX when watching videos or browsing the Web. Sprint's 3G is also the slowest nationwide 3G system, according to our 21-city tests earlier this year.
That slow 3G is compounded by the Torch's unfortunate habit of dropping to 2G 1XRTT mode randomly during my test period. It's a testament to the great way RIM handles messaging data that with email, IM, Facebook, and Twitter, I didn't notice. But for Web browsing, that's a real drag.
The 9850 connects to Wi-Fi networks as well, of course, and had no problem with our in-house 802.11n networks.
Like other BlackBerries in its family, the Torch 9850 is a global phone. It comes with a Sprint SIM card that offers relatively high roaming rates abroad. If you're adventurous, the SIM card slot is unlocked, so you can replace it with a local card. Remember also that BlackBerries use less data than competing smartphones thanks to server-side compression, making them a great choice for international travelers who don't want to get slapped with high roaming bills.


OS, Apps and Multimedia The 9850 is one of the first BlackBerry 7 phones, running the same operating system as the BlackBerry 9930 (Verizon Wireless) ($249, 3 stars) and BlackBerry 9810 (AT&T) ($49, 3 stars), among others. For a summary of BlackBerry 7 features from two different writers, check out Jamie Lendino's 9930 review and my 9810 review linked above. Our full review of the Sprint model of the 9930 is publishing soon.
In brief, BlackBerry 7 brings a much better Web browser (albeit without Flash), a much faster UI experience, new built-in apps including an excellent Microsoft Office document editor and world-class email, Facebook and Twitter capabilities. Businesses will still love this phone because it's manageable and secure, and works with BlackBerry servers.
For such a widespread OS, though, the third-party app situation here is dire. It got a little better over my review period; it seems like a bunch of BlackBerry 6 apps got approved for use on BlackBerry 7 devices while I was reviewing the 9850. That brought key news apps like AP Mobile and Reuters News Pro, as well as a bunch of weather apps, to the total of around 3,000 in BlackBerry App World. Some older apps, such as Kayak, launch usably but with distorted UIs because they aren't prepared for the 800-by-480 screen; others, such as TripIt, are available from the creators but not from App World.

The major difference between this and U.S. Cellular's model is in the preloads. Sprint has dumped a bunch of custom software on here, and—surprise!—some of it actually improves the experience. I'll stick to the good stuff here.
The BlackBerry 7 platform totally lacks good streaming video apps, so Sprint TV & Movies is a big deal. You get a relatively healthy selection of sports, news, and kids' programming for free, along with a surprising array of recent movies for $5.99 each. Video streamed in varying quality over 3G. The video was always sharp, but sometimes it was at a very low frame rate.
Vlingo is the other star of the preloads. This is the best voice dialing app ever, combining voice dialing, voice search, and the ability to enter and read back messages by voice.
Other preloads are of lesser value. Sprint Radio brings 60 streaming radio channels. Sprint Music Plus is inferior to the also preloaded Amazon MP3 store. NASCAR and Sprint Football Live have limited audiences. And Slacker is free on BlackBerry App World anyway.
What's missing? A great game. Only BrickBreaker and Word Mole are pre-loaded on here, and the BlackBerry 7 game selection ranges from poor-quality to tragic.
The lack of apps isn't a problem with the 9850's hardware. All of the built-in apps are speedy, the user interface is responsive, and the phone benchmarks just as well as other top-of-the-line smartphones. The problem seems to be either in the tools RIM is offering to its developers, or in those developers' choice to target the very popular 2008-era BlackBerry Curves rather than the latest and greatest devices.

The BlackBerry 9850 comes with about 2.5GB of built-in storage. Sprint includes a 4GB MicroSD card, and our 32GB SanDisk card worked fine as well.
You can sync the 9850 with PCs or Macs using RIM's excellent, free desktop software. The phone played all of our music files, including MP3, AAC, OGG, and WMA formats. It was a little pickier about video files, just like the 9930 and 9810; it supports MP4, H.264, DIVX, and XVID files up to 720p resolution, but a few of our MP4 files didn't play. Sound gets distorted when it's pumped through the built-in speaker, but it's fine over headphones or a Bluetooth headset.
The 5-megapixel camera takes shots instantly. Indoors, those shots are dim and grainy, but with good light the camera really comes into its own, with excellent resolution for a 5-megapixel phone camera. The video mode takes 720P HD videos at 30 frames per second indoors and out, without trouble.
ConclusionsBlackBerries, at this point, exist in their own world entirely independent of other smartphones. While Android phones and iPhones trumpet their flexibility and hundreds of thousands of apps, BlackBerries focus on being able to deliver email seamlessly over 2G networks. It's a completely different mindset.
That said, we believe the BlackBerry Bold 9930 is a better BlackBerry choice for Sprint subscribers. The 9850's large screen lends itself to media, Web browsing, and games— all BlackBerry weaknesses—while the 9930's excellent keyboard brings the story home to messaging, which is where the BlackBerry 7 platform excels. The 9930 also has the same processor and same international capabilities as the 9850.
Like other BlackBerry 7 devices, we're giving the 9850 a middling rating. It's not even really bothering to compete with the mainstream of today's smartphone market, devices like the Motorola Photon 4G (4.5 stars, $199.99) and Samsung Epic 4G ($99.99, 4 stars). It gets a slightly lower rating than its cousin on U.S. Cellular because of its lack of 4G (a network U.S. Cellular doesn't offer) and because the 9930 is a similar, better option on Sprint.
Posted by Toukir Rahman