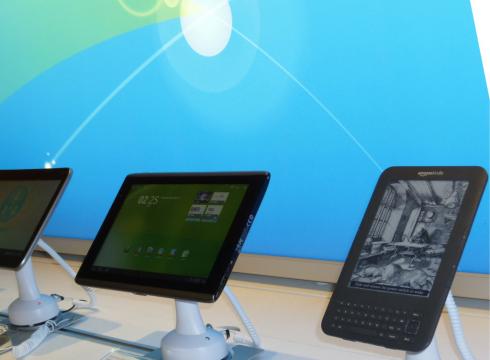 AT&T Chief Executive Randall Stephenson got an Amazon Kindle as a Christmas gift in 2007. A few months later, the company unwrapped a new emerging-devices group to explore the potential for all kinds of wireless options.
Today, Kindles are the fastest-growing connected device on AT&T's wireless network. The attention given to wireless devices beyond smartphones has paid off for the communications giant. AT&T's emerging-devices group is now driving wireless growth for the company, which took in $124 billion in total revenue in 2010.
Still, the company saw its second-quarter net income drop 10% this year as its exclusive contract with Apple's iPhone ended and Verizon got the hot-selling device, too, with Sprint reported to be next.
Apple's iPads and other tablets could provide the next revenue gusher. From April to June, AT&T gained 627,000 new connected-device customers — not counting its 5.6 million in smartphone sales.
AT&T's connected-device lineup on Monday gains another new tablet, the Acer Iconia. It's priced at $480 or can be bagged for $330 with a two-year, $35-per-month 4G wireless contract (available Sunday). This adds to AT&T's recently launched HTC JetSteam tablet on its 4G mobile broadband network, which promises speeds four times faster than its 3G network.
In tandem with the push for 4G tablets, AT&T plans a redesign of its 2,200 stores to include a new tablet and emerging-devices "wall" to display the latest connected gadgets. "Tablets are the new 'must-have' mobile devices," says Ralph de la Vega, CEO of AT&T Mobility and Consumer Markets. "Our goal is to give customers the widest selection of the best ones on the market. That's why we're making tablets a big part of our holiday store redesign."
However, retailers such as Best Buy have seen only modest results from increasing visibility of tablets and devices. "As consumer electronics are increasingly connected devices, it remains to be seen where consumers will prefer to shop," says Avi Greengart, research director of consumer devices at Current Analysis.
It helps that consumers are already interested in connected devices, says Glenn Lurie, president of AT&T's emerging-devices, national resale and partnerships division. "The way people compute now is becoming more and more like the way they use their smartphones," he says. "Now, if you buy a tablet, you want it to be an Internet device."
The iPad currently dominates the tablet space, but Lurie sees competition in the category growing as "tablets start to be very, very important not just to consumers, but to small, medium and large businesses alike."
While tablets today have all "the big buzz and growth," Lurie says that AT&T is preparing for the day when tablet connectivity eventually tops out, too, just as cellphone wireless penetration has today. (Nearly 85% of U.S. homes have a wireless phone, says CTIA-The Wireless Association.)
To that end, AT&T's emerging-devices group is looking to expand its wireless-networking reach beyond traditional handheld devices to automobiles as well as health care monitoring and personal tracking devices.
"The way we look at it, anything that has current running through it will be wirelessly enabled," Lurie says.
Posted by Toukir Rahman