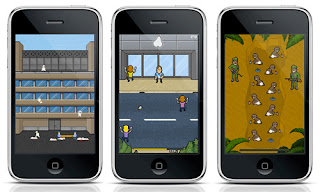 Apple has never hidden the fact that it has a stricter censorship policy for iOS apps than for other forms of entertainment. The debate about whether this is unfair is heating up once more this week, however, after it removed an iPhone game called Phone Story from its App Store.
The game was released by Italian developer Molleindustria, whose mission statement is to "reappropriate video games as a popular form of mass communication" and "investigate the persuasive potentials of the medium by subverting mainstream video gaming cliche".
In Phone Story's case, that took the form of four mini-games about the "troubling supply chain" behind smartphones – all smartphones, not specifically iPhones – including coltan extraction in Congo, outsourced labour in China, environmental waste in Pakistan, as well as the mania for gadgets in the West. One of the mini-games sees workers leaping from their factory building: a clear reference to suicides and attempted suicides by workers at Apple's manufacturing partner Foxconn.
Molleindustria said that all its net revenues from sales of the iPhone game would go to charities tackling corporate abuses.
A game where you have to catch plummeting factory employees, oversee underage miners and distribute smartphones outside a store with a white pear logo on the front? Apple's disapproval comes as no surprise, but in an interview with Gamasutra, Molleindustria's Paolo Pedercini says that in itself is a comment on the iOS ecosystem.


"Here's the problem: the unanimous reaction from developers community has been, 'Wow, it's incredible Phone Story made through Apple's review process'. To me, this signals a full acceptance of a regime of censorship, the equivalent, for developers, of what journalists call the 'chilling effect'. I'm sure that Apple doesn't spend that much time in policing its marketplace, because the developers are already censoring themselves."

Pedercini goes on to talk about Apple's wider attitude to cultural products. "Of course, Apple has the right; it is the acceptance of Apple view about the cultural status of the 'App'. For them, games and applications are not part of culture like books or music. Try to imagine what kind of reaction iTunes would provoke if they banned all the songs with 'excessive objectionable' content."
On one level, Apple can't be faulted for its transparency on this score. In September 2010, it published some App Store guidelines, available to all developers (and reprinted in full at the time on several websites). "We view Apps different than books or songs, which we do not curate," explained the document.


"If you want to criticize a religion, write a book. If you want to describe sex, write a book or a song, or create a medical app. It can get complicated, but we have decided to not allow certain kinds of content in the App Store… We will reject Apps for any content or behavior that we believe is over the line. What line, you ask? Well, as a Supreme Court Justice once said, 'I'll know it when I see it'. And we think that you will also know it when you cross it."

According to Pedercini, Apple's email informing him of Phone Story's removal claimed the game had crossed four specific lines, in the form of specific guidelines for unacceptable apps. Two relating to charities and contributions appear to be wide of the mark, with the guidelines focusing on in-app donations, while Molleindustria was merely saying it would donate its download revenues to charities once it was paid.
The other two flouted guidelines relate to depictions of "violence or abuse of children", and "excessively objectionable or crude content". The former appears to be crucial to the satirical intent of the game, while the latter is something of a grey area – who is most likely to object to the content here: users or Apple?
Judging by his Gamasutra interview, Pedercini is fairly pessimistic about his chances of getting a resubmitted version of the game approved. In the past, these situations have been resolved – for example Pulitzer Prize-winning cartoonist Mark Fiore had his NewsToons app rejected, sparking a media row over censorship, before resubmitting it unchanged and being approved. However, the subject material there was politicians and public figures, not Apple's own business.
The rejection of Phone Story raises wider questions for app publishers beyond the Games category in 2011. What kind of treatment could a newspaper or magazine expect if it ran a lead feature exploring exactly the topics highlighted in Molleindustria's game, for example?
It should be noted that thus far, Apple has shown no appetite for censoring editorial-based apps in this way. But the debate around how an app store owner responds when an app criticises and/or satirises its own business practices and those of its partners is not just restricted to Apple: it's one for all the platform owners, device makers and mobile operators launching their own curated stores.
Posted by Toukir Rahman